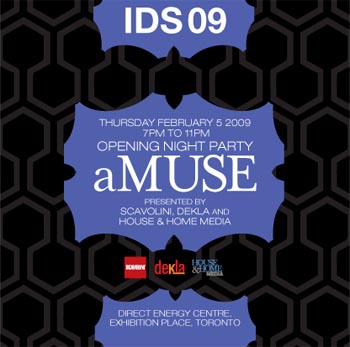 (image from runningdive)
It’s Feb! This is the shortest month of the year so let’s make it jam packed with fun. I am going to be attending the Trade preview today at Interior Design Show aka IDS09. Click the link on the right to see what it’s all about. One of my favorite all time inspirations is industrial designer, author and Canadian Karim Rashid. You might have heard his name from Umbra, his book Design Your SELF, and other engagements. The theme this year is Find Your Inspiration. Running from Feb 5-8 at the Direct Energy Centre on the CNE grounds, you should check it out. I am looking forward to the Crystal Clear, Studio North and Collaborations exhibits. Glittering prototypes with Swarovski crystal are so up my alley! On the 8th, they have a ‘GET GLAM’ special about how to glam up your living area. The panel talk and guest speakers are presenting 20 slides in 20 seconds. This is what life is about.

Communication and how blogs steer design trends is a big topic this year. It’s all in one place, stay fresh, and inspire yourself. Bath trends, Fashion colors, lighting techniques, global trends, designs and color research, sustainability vs luxury – so excited!
Get all the 411 here

Check back tomorrow for photos from the IDS09 Opening Night Party
HeyDoYou is for the cute, clever and connected – Follow this blog!

0 Comments
0
Oh my goodness! So much fun 😀 Hello Kitty @ M.A.C. is going to sell out for sure. Can someone buy me all of it Valentine’s day please! The party was complete with yummy bow tie chocolate cookies, pink lemonade + vodka and full size Hello Kitty man-nequins. Balloons, testers, kitty tattoos, pink order forms, a full line up of invite-onlys and their plus ones. Overwhelmed by cuteness – we all left a little bit more glamorous. Original post here.

Yah, we play dress up, we love makeup, we live fashion. We are the real deal.

Me being a Hello Kitty

This is what I call a man-nequin. Can you imagine the call sheet for this gig: wear kitty head, hold balloons. LMAO

My hands are full, my heart is bubbling over with cuteness ^_^

Flo getting a tattoo

me and hello kitty go way back!

VIP line
HeyDoYou is for the cute, clever and connected – Follow this blog!
0 Comments
0

Wow . It has been a long time coming for the release of Ryan Leslie’s self – titled debut Album. As a fan and super supporter of this incredible Producer/Singer/Songwriter/Entrepreneur, I wanted to do something to show my undying support. So my team and I came up with a contest for fans of R. LES. So here is what you have to do:

Send an email to: giveaways@lissamonet.com with the answers to the five Questions listed below.

Please include in your email: Your Full Name, and mailing address.

1. What college did Ryan Leslie Graduate from and at what age did he enter college?
2. Name four artists he produced songs for and the title of the song?
3. Name a recent European country that Ryan Leslie went to visit and perform in?
4. Name the First artist signed to Next Selection and Name the Newest Artist signed to NextSelection?
5. What are Ryan Leslie’s 4 D’s?

This Contest is for Canadian and US Residents Only.

Wow, Craigslist is really an amazing place for free stuff… You can practically furnish your home, read great classics, get free dvds, and now even a ferret!
The posting is here

Ferrets are interesting pets, I had one called Lenny for a summer when I was in London. Here is some more ‘factual’ insights on this pet. Ferrets spend 14 to 18 hours a day sleeping and are naturally crepuscular, meaning they are most active during dusk and dawn. They usually sleep in six hour sections. Though ferrets sleep more than most other domesticated animals, they are very active when awake and will seek to be released from their cage to get exercise and satisfy their abundant curiosity daily.

Ferrets are energetic, curious, interested in their surroundings, and often actively solicit play with humans, having a repertoire of behaviors both endearing and difficult for some human owners. Play for a ferret will often involve hide-and-seek games, or some form of predator/prey game in which either the human attempts to catch the ferret or the ferret to catch the human. They also have a strong nesting instinct and will repeatedly carry small objects to hidden locations. It is difficult to predict what objects ferrets will attempt to hoard, with owners reporting play toys, socks, bags of onions, pizza slices, keys, calculators, coins, silverware, aluminum foil, shoes, sponges, toilet paper rolls, textbooks, video game controllers, remote controls, footballs, brooms, pencils, erasers, bouncy balls, cardboard boxes, etc. Ferrets will seemingly form attachments to certain objects and will repeatedly ‘steal’ the same object and bring it to their hiding place.

When ferrets are excited, they may perform a routine commonly referred to as the weasel war dance, a frenzied series of sideways hops. This is often accompanied by a soft clucking noise, commonly referred to as dooking. It is often an invitation to play or an expression of happy excitement and is not threatening. The ferret’s posture may become rigid with wide open jaws, momentary eye contact followed by thrashing or turning of the head from side to side, arching the back, piloerection (goosebumps), and hopping to the side or backwards while facing the intended playmate. This is often accompanied by an excited panting sound that may sound like a hiss. Often, this behavior will break into a game of chase, pounce and wrestle. Ferrets in war dances are very accident prone, often hopping into obstacles or tripping over their own feet

So if you actually get this lil ferret – make sure you take lots of video.

This was screened during TIFF09 and was SOLD OUT. Come out and support Canadian talent. NURSE.FIGHTER.BOY is an urban love story about the soul of a mother, the heart of a fighter and the faith of a child.
Jude is a single mother who descends from a long line of Jamaican caregivers. SILENCE is a past his prime boxer who fights illegally to survive. CIEL is a boy who delves into music, conjuring dreams for his mother. During the last week of summer, a late-night brawl finds the fighter in the nurse`s care, causing their three fates to be forever entwined.