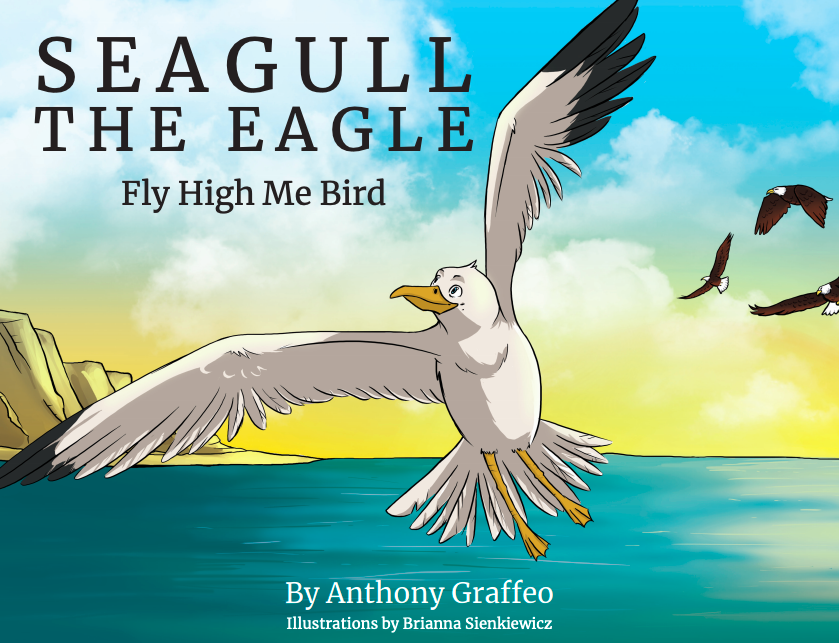 Sandy Hook, CT: December 17, 2018 – Entrepreneur and debut author Anthony Graffeo today announced the immediate availability of the animated children’s book, “Seagull the Eagle”, which shares life lessons and illuminates a path of self-discovery for young children.  The book is available via soft cover and e-book formats at: www.seagulltheeagle.com.

Seagull the Eagle tells the story of an orphaned Seagull growing up and recognizing that some birds fly higher than others, and some fly lower.  He wonders: “where’s my place in the world?”  Because no one tells him who he is, or what he should be, Seagull soars as high as he can – thinking he is an eagle.  During his journey, he encounters Seagulls and Eagles that mock him, and try to limit him – and he also sees how some birds settle for scraps and never dare to strive for more, while other birds put themselves above all.

“Seagull’s goal is to teach children that they don’t need to limit themselves, based on their environment, or based on what others think of them,” states author Anthony Graffeo.  “The story and the illustrations can show children that – even if they’re different – they can not only find their place in the world, but they can also have a say in making that place for themselves.”

The Book is available online at:   https://seagulltheeagle.com/.

Anthony Graffeo is from Sandy Hook, Connecticut.  He is married with four children ranging from ages 4-14.  Anthony is the founder of the FlipRocks Extreme Footwear Company, and he is an avid outdoorsman who loves fishing.  Seagull the Eagle was inspired while fishing in Hampton Bays NY, at the Shinecock Canal.

About Seagull the Eagle:

A small, orphaned seagull learns to fish by watching a group of nearby eagles.  Thinking he too is an eagle, the seagull swoops down to the water to try it himself.  This angers the other eagles who can’t understand why he isn’t acting like a seagull, scavenging for garbage.  Unable to integrate with the eagles or his own kind, the seagull embarks on his own path of self-discovery — and learns a life-changing lesson along the way.  The debut children’s story from author Anthony Graffeo, Seagull the Eagle offers sage advice and stunning illustrations from Brianna Sienkiewicz for readers of all ages.

CHILDRENSWEAR THAT SPEAKS WITH A CONSCIENCE