The Time Warner Medialab is New York’s state-of-the-art research lab focus on consumer behavior across the content spectrum! All the research done in this building allows Time Warner and its key partners an opportunity to understand consumer insights from media, all the way through retail environment as well.

The Medialab, as TW calls the space, is based on the company’s Manhattan Time Warner Center headquarters and exists to, in official terms, “[incorporate] cutting-edge technologies and research techniques [to provide] an unmatched ability to test consumer engagement throughout the entire 360° media-to-retail experience.” Complete with biometric monitoring and eye-tracking capabilities, as well as focus group space for the old-fashioned analysts out there and broadcast capabilities to finetune test content, the massive location includes retail space, video game stations, an “in-home living-room simulation” and a 50-seat screening space to best sample product in a variety of settings. According to the project’s official website, “In order to foster the company’s continued growth as a progressive supplier of engaging content, Time Warner and its core divisions–HBO, Time Inc., Turner, and Warner Bros.–consider the Medialab an essential instrument in understanding consumer behavior, evolving media habits, and industry trends.”

I had the chance to visit the Time Warner Medialab in Columbus Circle in New York City this week! 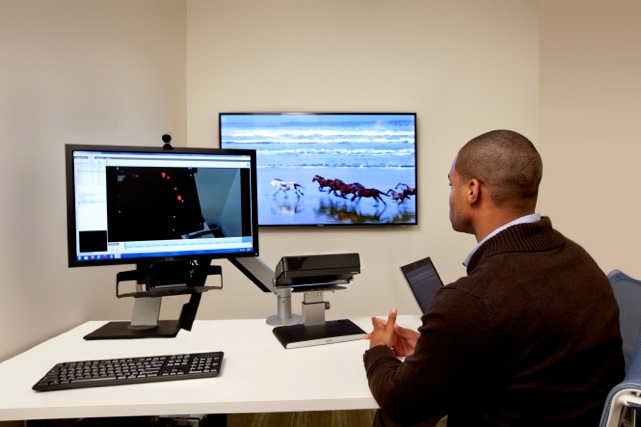 The first place worth mentioning is the testing studio. When you enter the Studio One, you can see one large screen and one computer screen showing the same content. A guy in the camera was shown on the screen, and there are lines linking red dots on jumping around the whole screen, which means the direction your eyesight goes. In the real world, that is used by a track which part of the screen can attract people’s attention when they are watching. On the other, second-screen apps that complement the TV viewing experience can heighten people’s response to the advertising and programming.

The next room we went to is the Control Room. That is where Time Warner conducts the tests for their media products. Different focus groups of people will be invited to take the interview and finish surveys. The whole control room is neat with a clean table of-of bunch chairs, but there are some interesting secrets under that. If you squat to see the bottom side of the table, you will see eight displayers hiding in there. Because of that design, instruments can hide well under the neat appearance.

The Time Warner is a terrific place for the media business. It can let the media company know how consumers engage with content and enable testing with the latest devices and distribution platform.

For more info, check out http://www.timewarnermedialab.com