The world of Smart Watches has opened a pandora’s box for many watch makers. From home name brands such as Swatch and Nixxon coming into the fray to compete for the best smart watch, it can be a bit daunting to find the right one. However, Samsung has been one of the earlier pioneers of smart watch technology. A lot of their earlier smart watches have been hit or miss, but this year, they kept traditional watch design with extraordinary processing speeds to give us the Gear S3 Frontier and Classic.

Design
The Gear S3 is quintessential for any Samsung or Android user who wants to have a powerful watch that does more then your standard watch. It comes built in with a .22m band, that can easily be customizable. I personally have a few myself, and its great to be able to quickly snap on various, depending on the occasion. The watchband is sturdy and has that rugged frontier idea, but the texture is hidden by the color of the band. When it comes to wearing it around daily, I often forget that I have it on my hand. It is very comfortable to wear and it doesn’t bother me in the slightest. 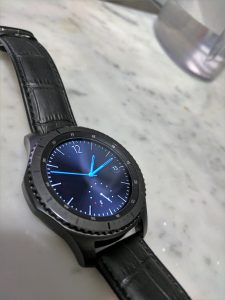 Another great design feature is the moveable bezel. With it, you can receive calls just by turning the bezel left or right. It also feels reminiscent of the classic G-Shock watches. The Gear S3 can also be operated with touch, but I found myself enjoying to rotate the bezel, rather then using my fingers to click on the menu items.

Texting is also surprisingly easy on the Gear S3. You can use the Voice Feature or you can reply to your texts via your fingers. Its not hard at all, although it does take a few tries to get it right.

Since the Gear S3 is part of the Samsung Ecosystem, you can expect a lot of the great features you would get from Samsung onto the watch. Samsung Smart Watches have been notorious for over promising applications that will be useful for your Gear S3. It’s native apps are great. If you’re into health and keeping up with your heart rate, Samsung has utilize its own native app, S-Health to give you on the go health updates. It is keen, especially with one of the top selling points is a built in GPS. (If you are looking for something smaller, the Gear Fit 2 offers the same thing for the sportier types.)

However, when it comes to the Sleep Monitor on the Gear S3, I find it lacking. While the Gear Fit2 accurately tracked my sleep well, I feel that this doesn’t track it. On average, I sleep between 6 – 8hrs, but certain nights, it will only record 2 – 5 hours of sleep. I tried to tinker with the sleep monitor to no avail. But when it does work, it accurately tracks motionless sleep and it can easily be recorded onto your phone.

Having a Smart Watch is all about the extension of your phone. But the Gear S3 does a lot more, and with its design, its certain to be a welcoming addition to anyone who wants to keep themselves connected without pulling out your phone.