HandsOn Bathing and Grooming Gloves revolutionary product is the one of a kind glove that is improving the way caregivers and pet owners groom their pets!

One of the most important ways to bond with your pet with through bath time! If your dog is a nervous nelly or just loves baths, they gloves could be a great addtion to your ritual.

HandsOn Gloves has changed the way you bathe, shed and groom your beautiful pets and works wet or dry with the 5-fingered glove allowing for the perfect combination of scrubbing nodules on fingers and palms. Hands On Gloves stay on your hands throughout your care for your animals, and as the best shedder on the market, they easily accumulate hair.  HandsOn Gloves helps massage and stimulate circulation improving skin and coat, and they are gentle enough to the touch on sensitive contoured areas of the body. – https://handsongloves.com/shop/ 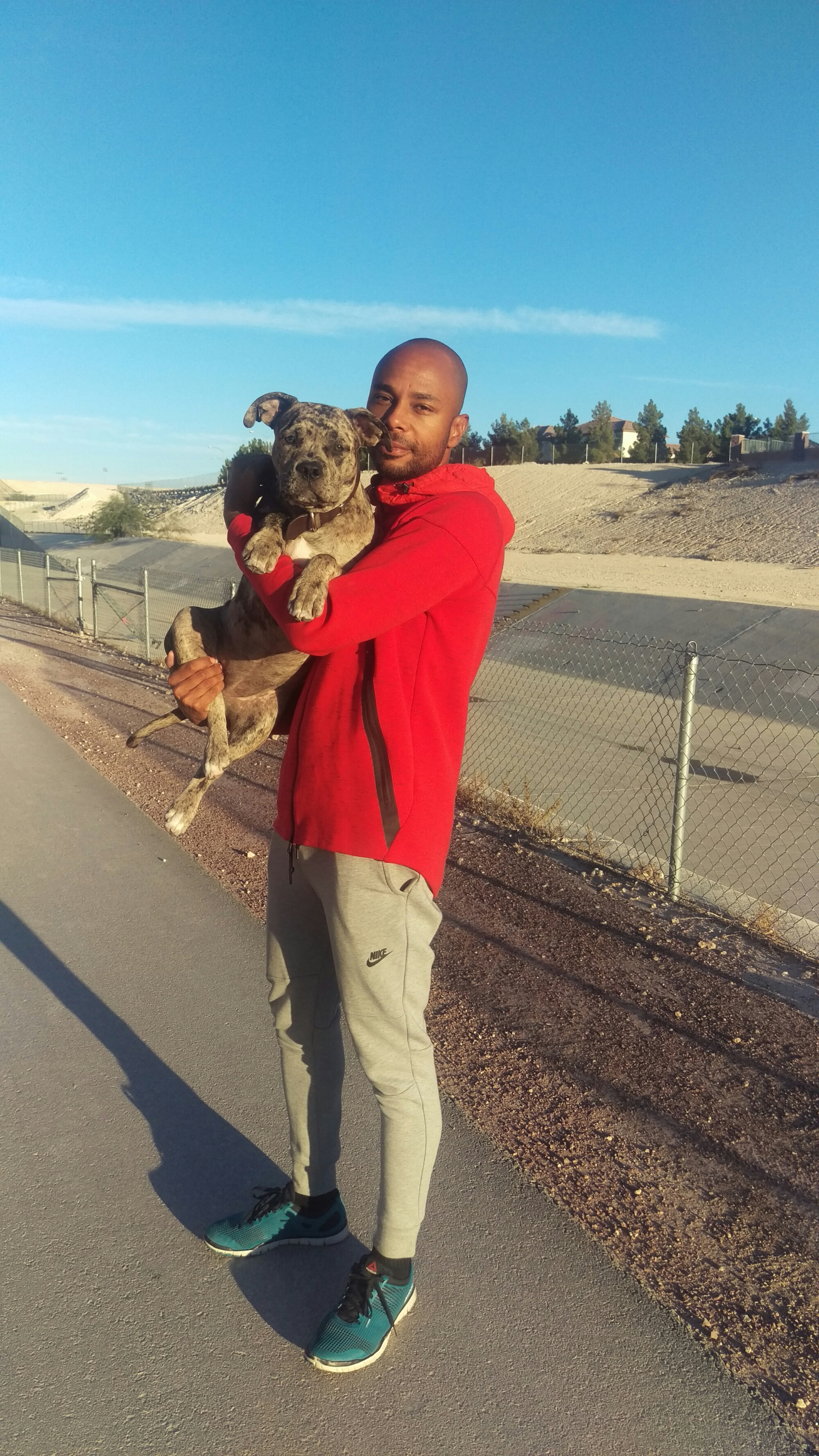 What an impact HandsOn Gloves is making!  Users will find your animals wanting to come closer at groom time and HandsOn Gloves can help you bond with your pets.  HandsOn Gloves are carefully designed with hypo-allergenic, bio-friendly components which are clinically proven to be safe for use with humans and animals.   HandsOn Gloves now come in small, medium and large. www.HandsOnGloves.com

The best way to love your dog is to feed it high nutritional value food that is REAL. Dogs need trace minerals, vitamins and stimulation. Eating is a huge part of their development and TruDog products will give you the ease of kibble with the benefits of raw. 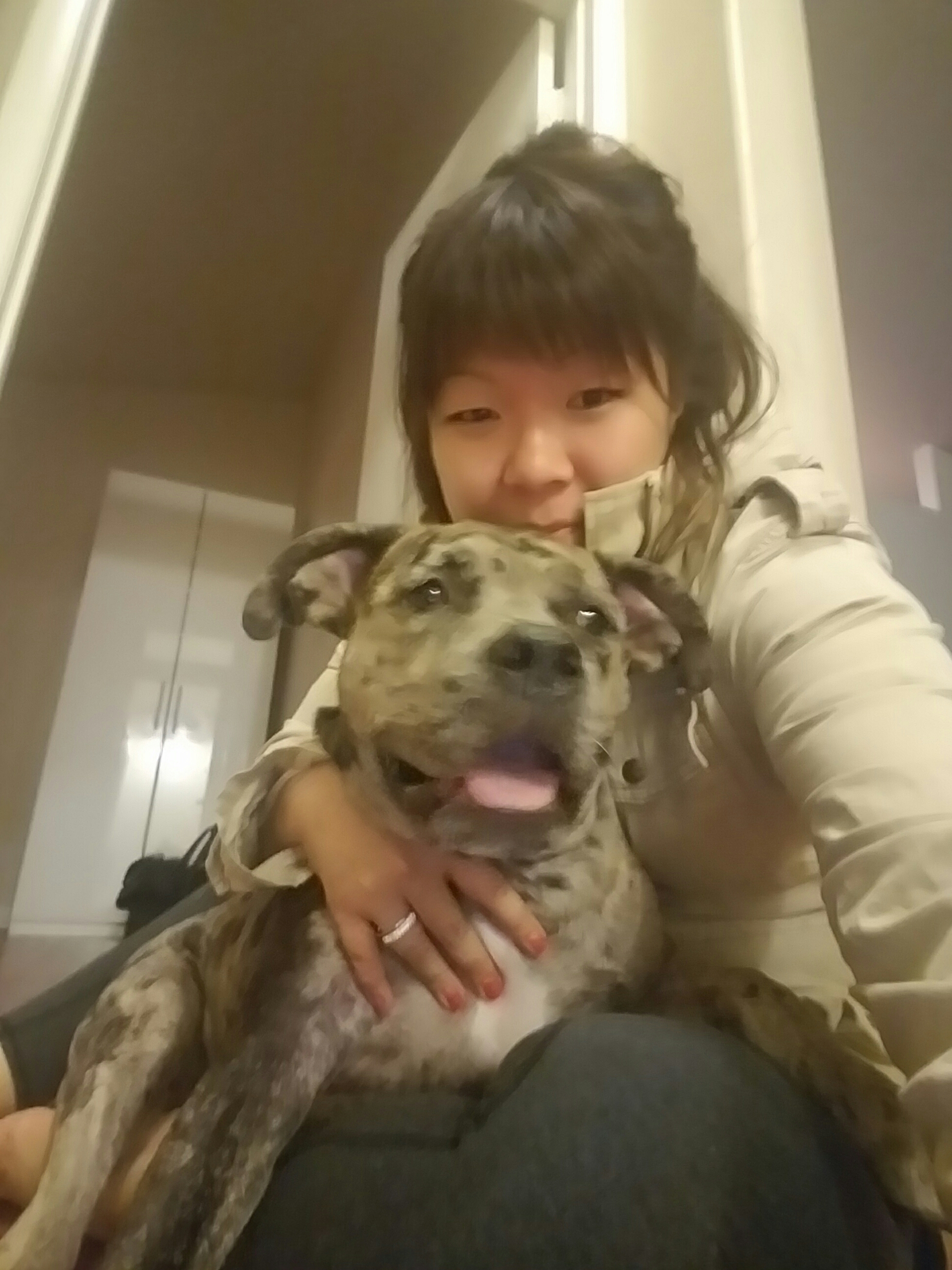 HandsOn, is a tool that makes grooming and bathing your animal as natural as petting and creates a special bond between the two of you.

HandsOn is a set of unique grooming and bathing gloves that:

Entrepreneur and founder, Lori Taylor deserves a pat on the back for her natural health and nutrition products at TruDog!

Give your dog a full treatment and pampering of good health products adding comfort and joy to their everyday and during the Holidays too with TruDog. TruDog’s Orapup Starter Kit will help get rid of stinky dog breath and promote a healthy mouth for your pet! The Starter Kit includes the Orapup tongue cleaning brushwith a 2 ounce bottle of Beef ’n’ Bacon Lickies fortified with all-natural enzymes and anti-plaque benefits for your dogs TLC against bad breath. Give the gift of the starter kit! https://trudog.com/our-products/orapup/

Help our four-legged friends live longer with products like TruDog’s FeedMe real meat freeze-dried raw superfood made using fresh, high quality, U.S.A. raised, raw meat, and NO ADDITIVES!  TruDog’s products lines optimize your dog’s life form head to tail: joints, teeth, digestive system, skin & coat care. Add in TruDog’s ProtectMe, an easy-to-use gravy that makes it simple and easy to give your dog the enzymes he needs. With a simple pump of the probiotic on your dog’s good, he will be better prepared to digest his meal he is about to enjoy lessening tummy troubles. Check out the benefits of a raw food diet recommended by TruDog on this diagram: https://trudog.com/home/why-super-food

On a mission to improve people’s quality of life through innovation and eco-friendly products, RevoMax has designed the first-of-its-kind twist-free, thread-less, vacuum insulated bottle. Translation- cool bottle for hot or cold beverages you don’t have to screw to top off of. 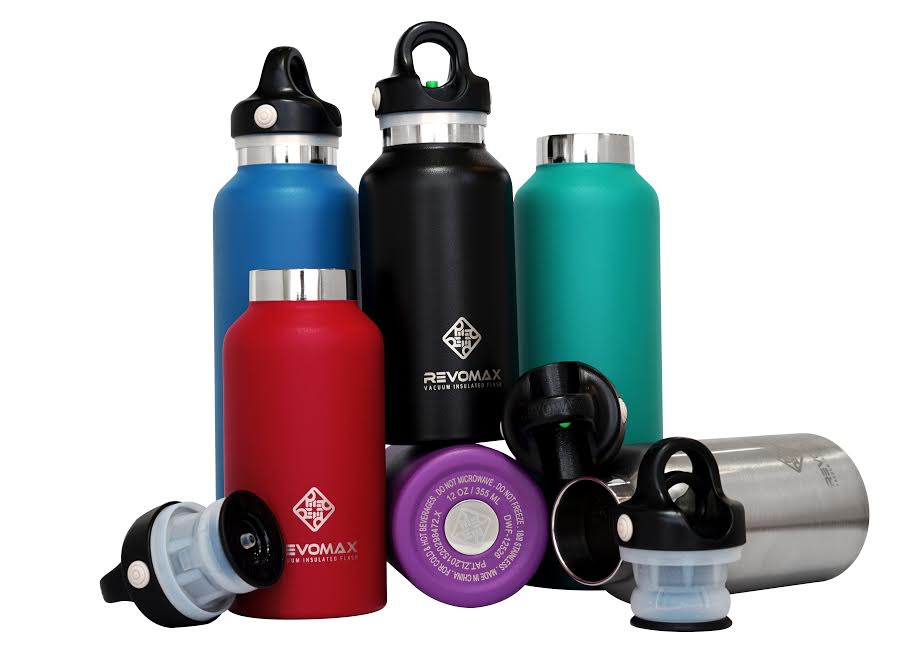 The first real innovation in on-the-go drinking vessels since, well… ever, Quick Release Cap technology opens and closes with one hand and one click- eliminating cumbersome twisting or screwing action. RevoMax flasks are responsibly made with 18/8 food-grade stainless steel and silicon rubber seal, are powder-coated (except for the classic stainless steel) and are 100% BPA and Phthalate-free. The sleek design fits nicely into most cup holders while its comfortable grip, wide mouth, and convenient one-handed operation deliver the optimal drinking experience. Available in 12oz($24.99) and 20oz ($29.99) at Amazon.com.
Easing everyday life wherever it takes you, Gobi Gear’s HoboRoll ($39.99) is an organizational stuff-sack with five internal segments to keep belongings organized and accessible. This lightweight, incredibly durable sack fits inside any day bag, gym bag or duffle for travel, or attached the shoulder strap (sold separately) for independent carry. 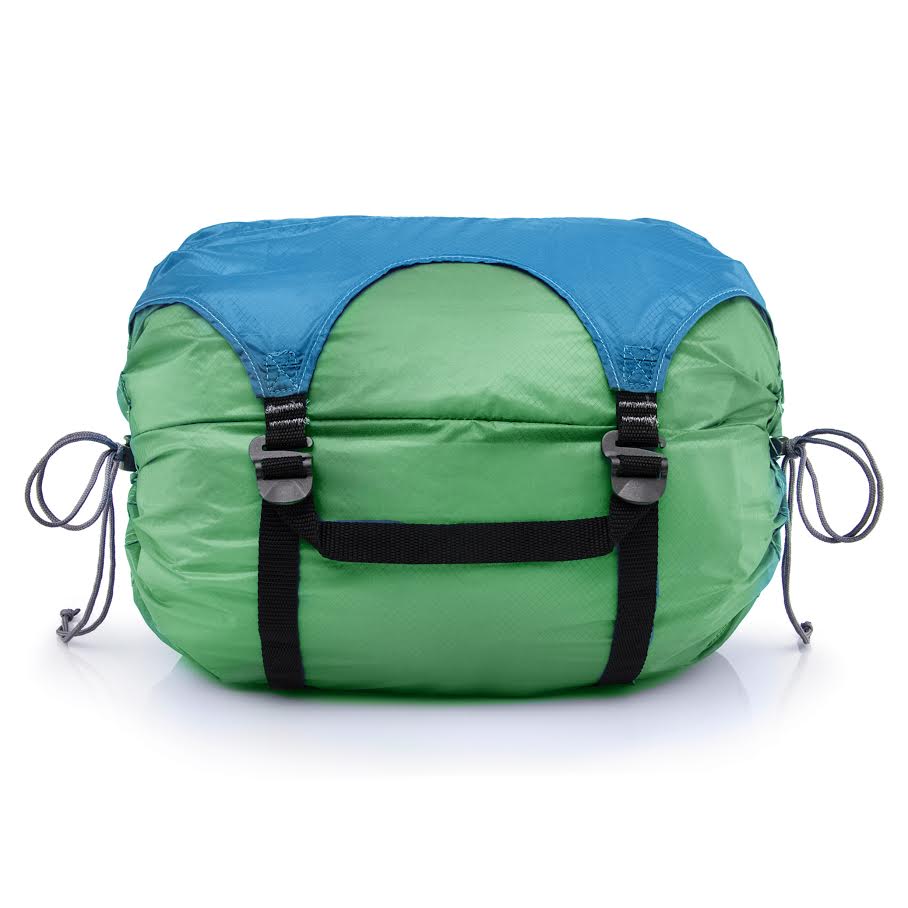 Heydoyou Blogger LULU (Yueming Qu)’s illustration will be at the show. 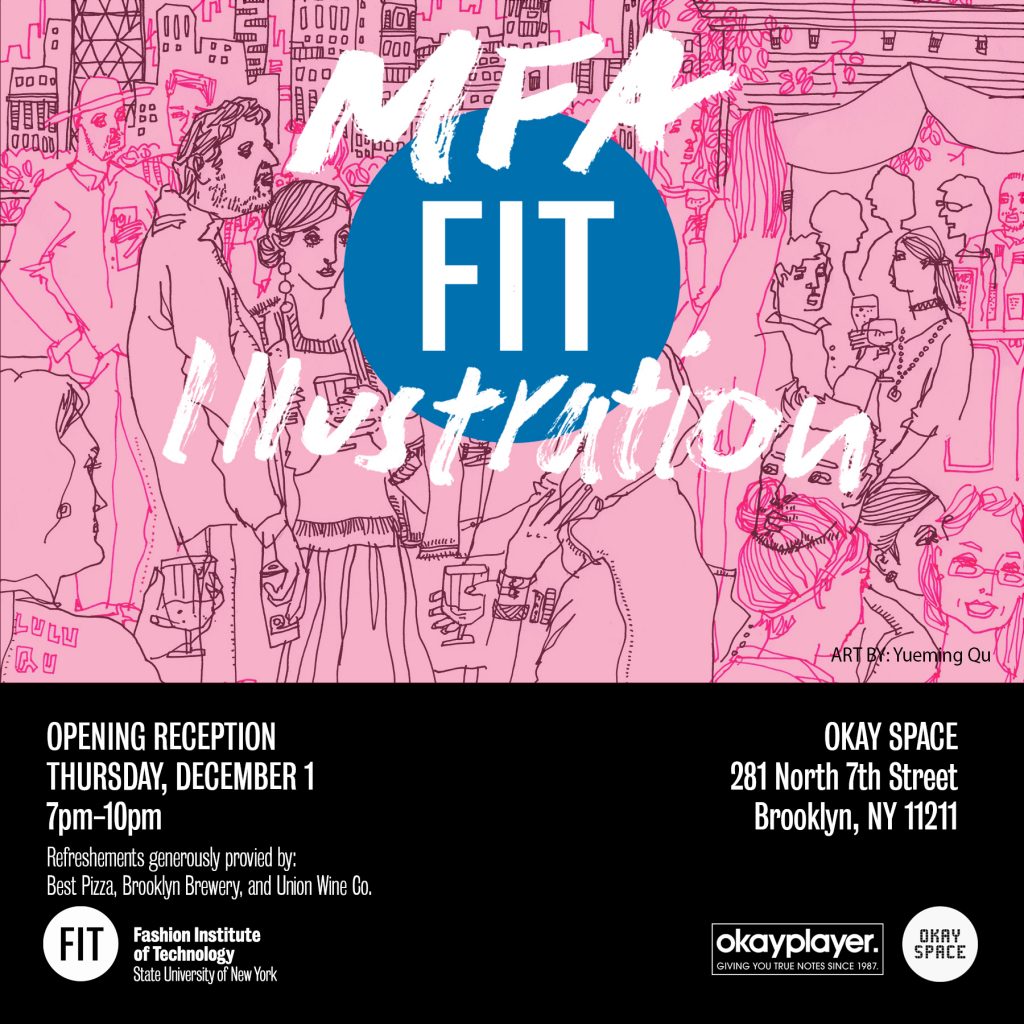 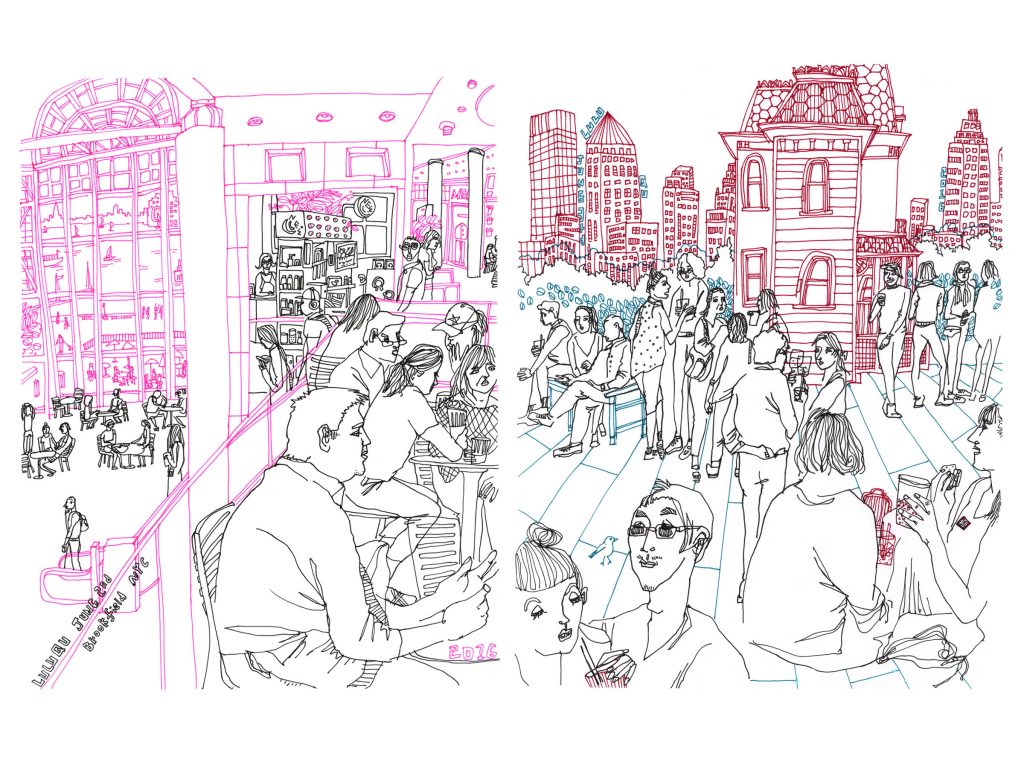 The Fashion Institute of Technology Masters of Fine Arts in Illustration program, founded and designed by Melanie Reim, began as a Master of Arts degree and first awarded diplomas in 2007. In 2010 the program welcomed its first MFA candidates. The FIT MFA in illustration seeks out dedicated and talented students, and encourages them to develop into sophisticated professional artist and illustrators.

As individuals, out students are painters, designers, animators, writers, and story tellers. As a group, they are a powerful voice. The 2016 Fall Show is an expression of that voice. This group exhibition, the first featuring all of our current students, recent graduates, and faculty, is a student driven initiative.

Presented here are images representing the work of the FIT MFA in illustration candidates for the classes of 2016, 2017, 2018, 2019, and faculty members. 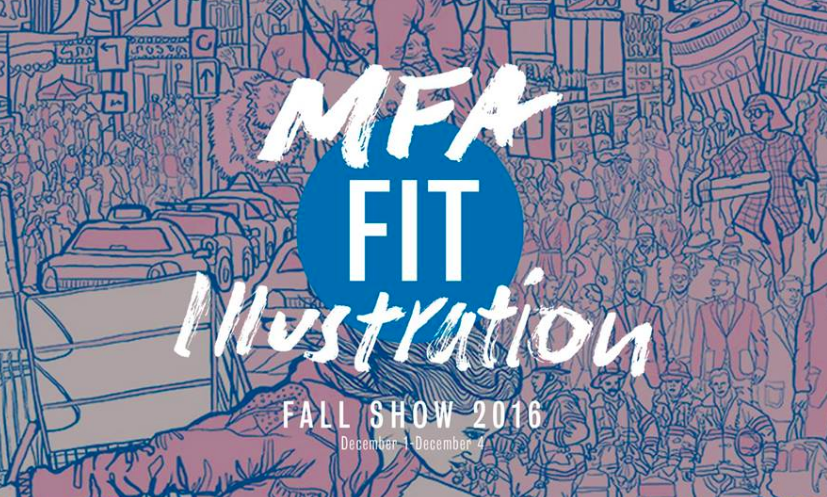 This exhibition is presented in partnership with OkayPlayer and Okay Space, with generous support from the Fashion Institute of Technology School of Graduate Studies, and Dean Mary Davis. Thankful for additional donations by Brooklyn Brewery, Union Wine Company, Best Pizza and Blick Art Supplies.

Acclaimed Indonesian Designer, Anniesa Hasibuan, is known for her stunning detail work and modest-wear separates that can be mixed and matched in endless combinations will head to Mercedes Benz Fashion Week Doha on the heels of her New York Fashion Week success gaining recognition from CNN, ELLE, Cosmopolitan, Huffington Post, Popsugar, Refinery 29, Teen Vogue, Yahoo!, USA Today and many more. Hasibuan’s Doha debut will take place at the Hilton Doha with an exclusive red carpet opening at 6:30pm. 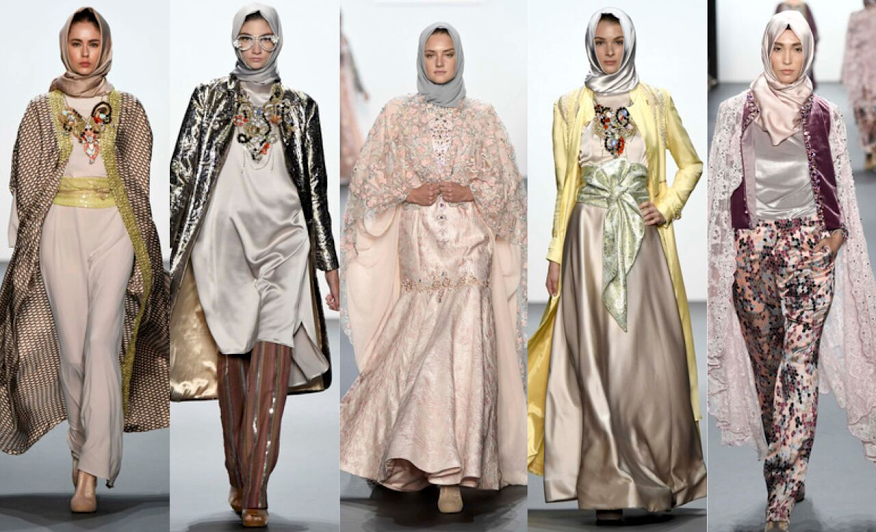 In partnership with IFG (Indonesian Fashion Gallery), the talented 30-year-old designer is expanding her reach to Doha after successfully showing all over the globe including New York, London and Paris. She was inspired to create a Spring/Summer 2017 collection that would break boundaries and crossover to mainstream fashion with mix and match separates in an earthy color palette of neutrals, peaches and greens that can be worn with our without a hijab.

The theme for this collection, ‘Jakarta’, drew inspiration from the people in the designer’s hometown. According to Anniesa Hasibuan, Jakarta occupants have unique style because they originate from many different indigenous tribes and foreign backgrounds.  Each piece in the collection features exquisite fabrics including metallic, intense beadwork and embroidery details. 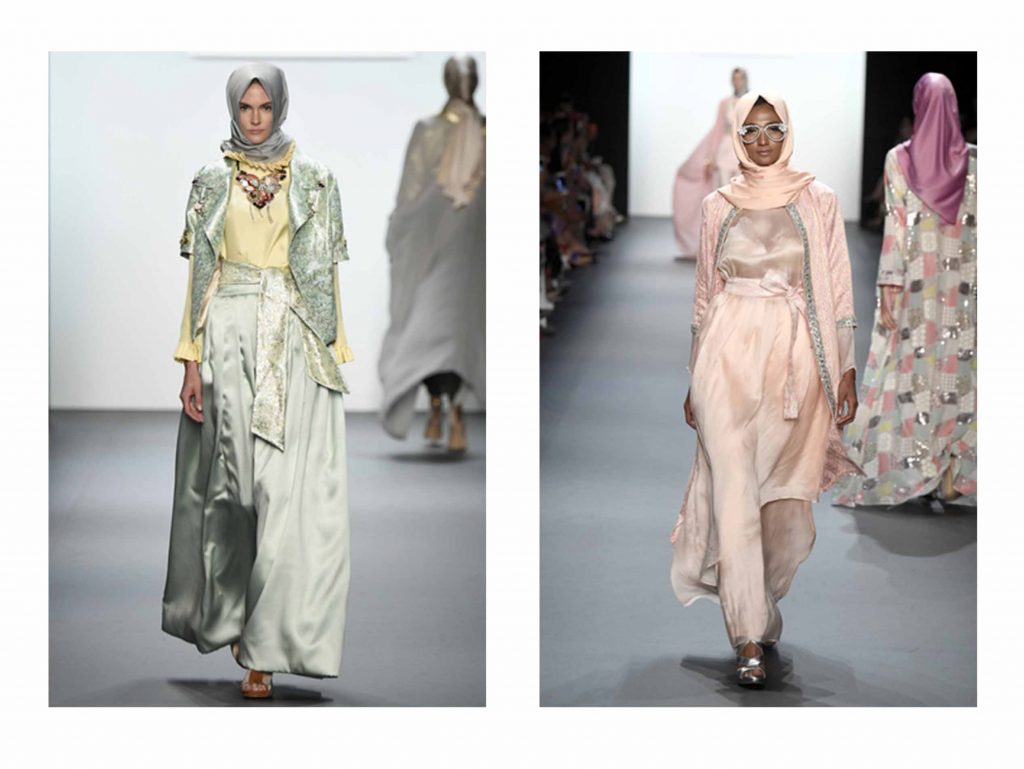 Anniesa Hasibuan is thrilled to present her Spring/Summer 2017 collection to the Doha audience. After receiving international praise from a phenomenal New York Fashion Week debut, the young designer will expand to countless untapped markets this season. 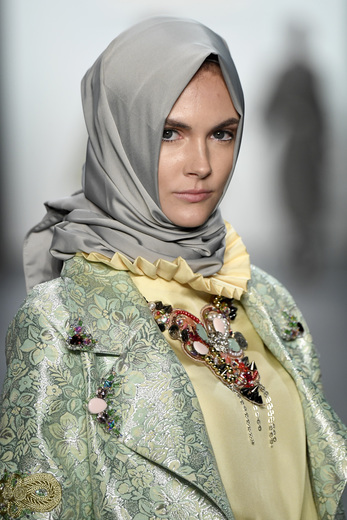 Anniesa Hasibuan is born in Jakarta, July 30 1986. She is the wife of a young entrepreneur, Andika Surachman. After some time, Anniesa began a new hobby and dove in to the fashion world. Initially, she designed outfits for herself but as time went by she began designing for the close friends. In the early portion of 2015, Anniesa along with her husband’s support took a huge step into the fashion world.

Her passion in the fashion world drove her to her first big runway debut in London, which is one of the four fashion capitals in the world. Her design was welcomed in London, she then began taking fashion designing courses in London to enhance her uprising career. Anniesa’s collection is currently available at IFG (Indonesia Fashion Gallery) in New York City to expand her voice.

The holidays are right around the corner which means your social calendar is already filling up. From office parties, to holiday dinners with your friends and family, to New Year’s Eve – you want to look good and that means the perfect outfit.

It’s already an expensive time of year so a new outfit for each party may not be in the budget. Enter MFMK, a free online styling service to help you put together your best outfit, maybe you just need some inspiration or a new top to go with your favourite skirt. Simply create a profile, complete a questionnaire and have professional stylists make personalized recommendations for you! 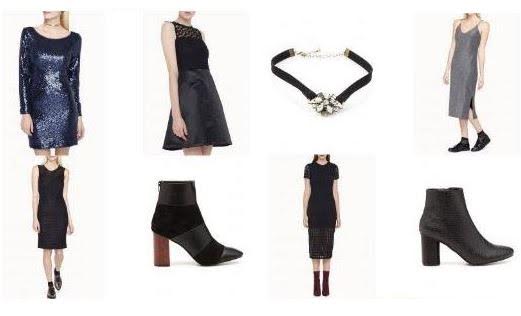 MFMK is a completely free professional stylist service that creates for you your next favourite look based on your tastes, your needs, your style and your budget.

Receive your own personalized outfit boards, created by our stylists, from the wide variety of clothing and accessories of our Style Partners.

0 Comments
0
To begin, prep the skin by cleansing with a mild product. The NEW Hydrating Cleansing Bar ($2.99) from AQUATION™ gently cleanses away dirt, oil and make up while nourishing skin with its rich lather. 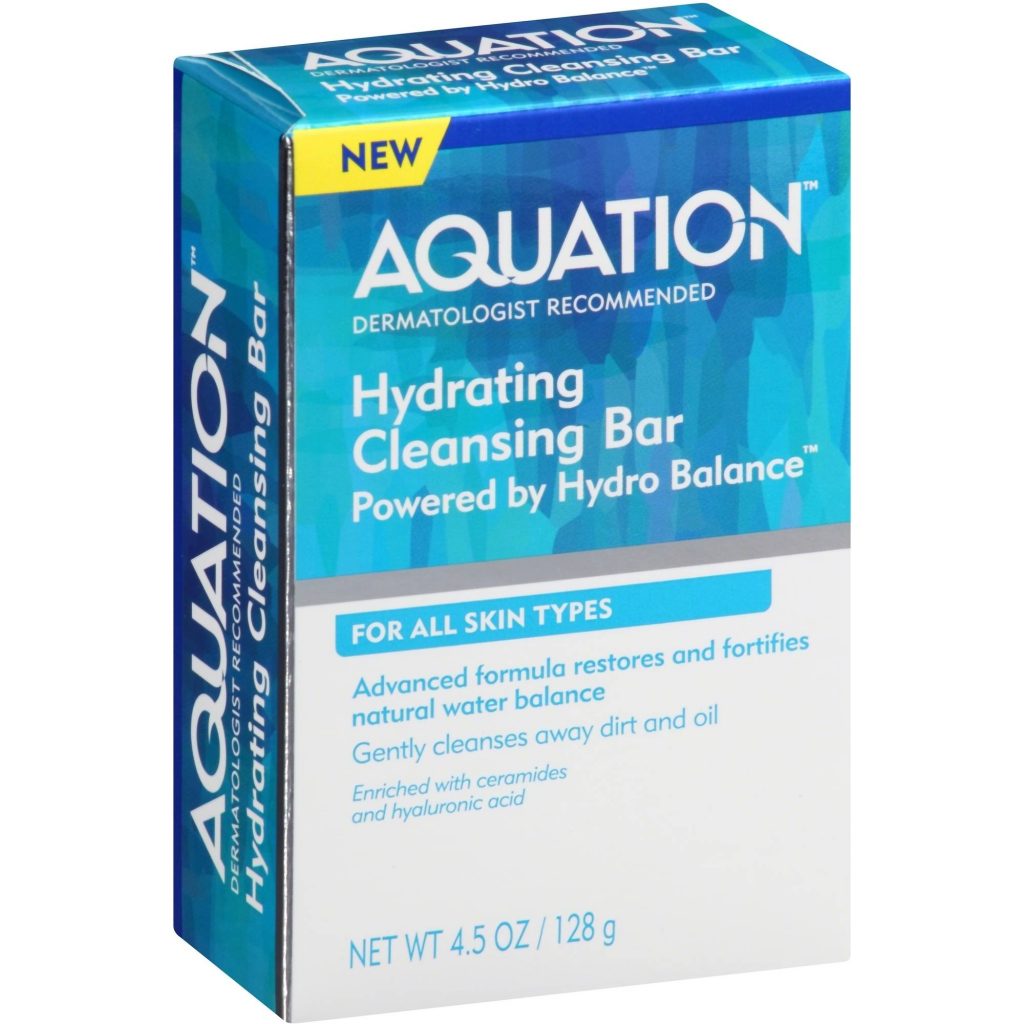 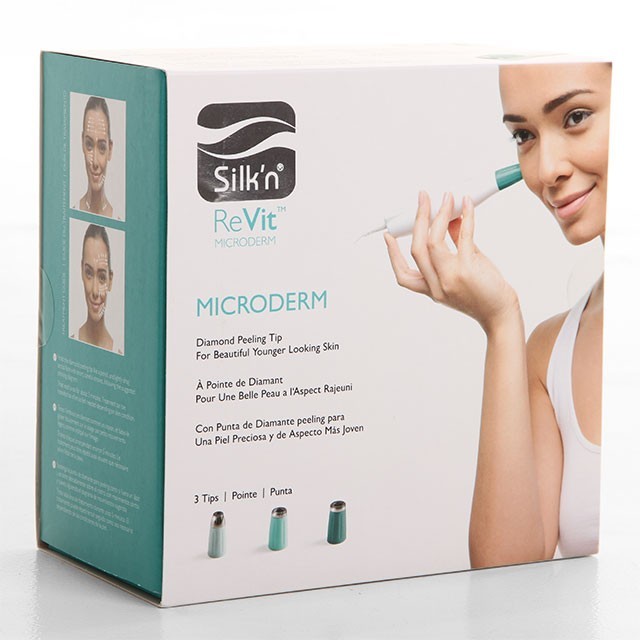 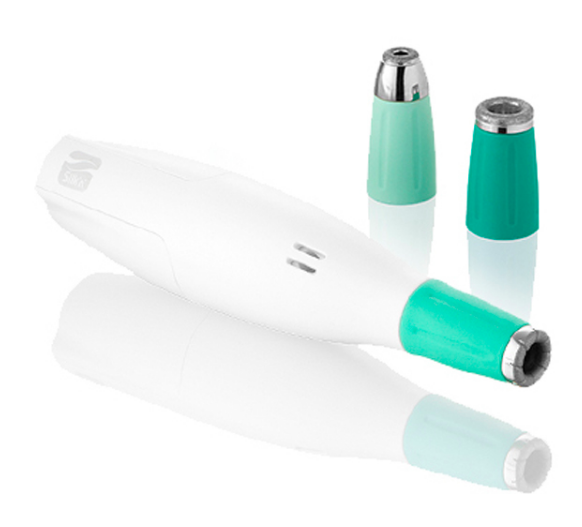 The carefully designed at-home microdermabrator allows users to treat common problem areas, including the forehead, neck, cheeks, around the eyes and nose, chin and hands, to restore balance and achieve smoother, younger and flawless-looking skin. Available for purchase at Silkn.com.
Finish your face with Osmotics Cosmeceuticals Blue Copper 5 – 7 Night Molecular Repair Treatment ($98.00). This powerful seven-night treatment combines the anti-aging benefits of copper with a proprietary extract that triggers the natural repair process of the skin. This soothing, restorative serum reduces redness and irritation. 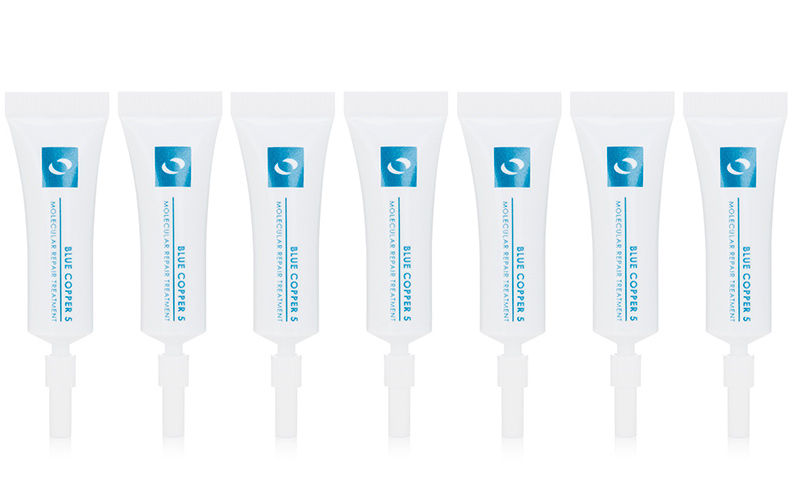 Ideal for use after a beauty treatment/ peel, on a hot summer day at the beach or during airplane travel when skin needs a bit of extra TLC. Each ampoule visibly increases elasticity, firmness and tone, softens fine lines and wrinkles, and improves overall texture. Available for purchase at Nordstrom and Dillard’s store locations, as well as independent boutiques and spas, Soft Surrounding Stores, or at www.osmotics.com.
Now, don’t forget your body, the AQUATION™ Moisturizing Cream ($9.99)offers all day hydration in a single application. The luxuriously rich formula penetrates deeply for intense hydration and instantly relieves dryness, softens skin and soothes dry skin itch and irritation. 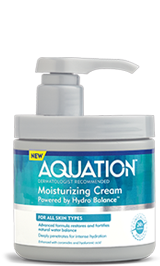