The coolest kiddo I know just turned 2 this month and what better way to celebrate her but with the personalized color books from our friends at Put Me in Your Story!   With the most creative and artsy parents ever… Her dad is a Pratt graduate industrial designer and mom is a DIY everything plus amazing baker… I just can’t wait to see what Dali’s medium will be. 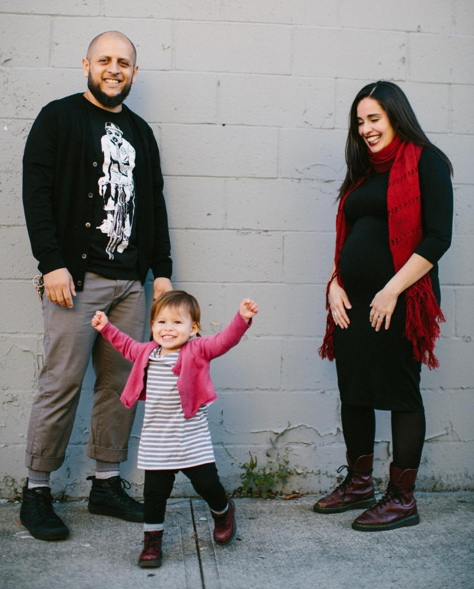 Keep Calm and Color On

Looking for a new way to get inspired? Boost your creativity with a personalized Keep Calm and Color On coloring book! Enjoy over 60 beautifully designed patterns and discover inspiring quotes throughout. From cool little kids to artsy adults, everyone deserves a few mindful moments for themselves. Keep your creations bound in the book or decorate your space with your colorful masterpieces. The creative possibilities are endless with this hands-on way to have fun and keep calm.

Personalize this intricately designed, completely calming coloring book with a name and dedication message for the creative person in your life, or gift yourself a much-needed getaway.

This is the best way to ‘unplug’ and get some ME time. Coloring is therapy and spending time with yourself is a way of meditation. So color on and clear your mind while you are at it.

opcorn Utopia! At California Frozen Poppers we do it different than anyone else out there. The Mad Popper andThe Crew make sure to put a whole lot of love and positivity into the process which is hand-made! Enjoy our popcorn and let it bring a smile to your face! You can freeze & re-freeze our popcorn and it is best consumed FROZEN!

Introducing a new way to eat popcorn – FROZEN! Have you tried these? I didn’t know what to expect when I first tried these but they are certainly quite different. If you are looking for a new snack to spice up your life, see what flavors tickle your fancy at California Frozen Poppers!

Long considered one of the most beautiful places in the world, Niagara Falls has been named the most photographed location in Canada on the social network Instagram.

The Huffington Post named Niagara Falls as the most instagrammed location in Canada in 2015. Niagara Falls has always been known as a beautiful, breathtaking and romantic location, lending itself to preserving memories with photography.

Photography in Niagara Falls has remained popular, even with the advent of social media, including photo-centric social media platforms such as Instagram. Instagram, acquired by Facebook for $1 billion in 2012, is the 3rd most popular social media platform in world, with over 300 million active monthly users sharing on average over 70 million photos per day.

“Regardless of technological advances, the beauty of Niagara Falls remains timeless, as proven by the popularity of photography found on all social media networks, including Instagram” says Anthony Annunziata, Vice-President of Marketing for the Marriott Fallsview Hotel & Spa.

Popular locations for taking photos of Niagara Falls include along the Niagara Parkway, standing beside the Falls, and from Niagara Falls hotel rooms overlooking Niagara Falls, aptly named ‘Fallsview Rooms’.

The Niagara Fallsview Marriott Hotel & Spa is featured in over 5000 unique instagrams every year, with the majority of photos showing off the view of Niagara Falls.

“As soon as you open a door to one of our Fallsview Rooms you’ll understand why they are so popular on social media—we offer the best view of Niagara Falls, all within a deluxe hotel accommodation that only a Marriott hotel can provide.” Says Annunziata.

About the Marriott Fallsview Niagara Falls Hotel and Spa:

0 Comments
0
New York City is known for the amazing shopping opportunities – There are ways a New Yorker can pay sky high rent and look fabulous and fashionable. The secret? The upcoming United Nude sample sale!
United Nude is holding their epic sample sale from January 25th to 30th, at their NYC Flagship on Bond Street…there will be TWO THOUSAND SHOES at the sale!
There are fabulous, rare options at up to 70% off MEN + WOMEN: sneakers and heels, as well as speciality items like backpacks.
About UNITED NUDE:
Started in 2003 as a collaboration between Pritzker-Prize winning architect Rem Koolhaas and Galahad Clark, a seventh generation member of British shoe-making dynasty Clark’s, UNITED NUDE has proven itself a leader in architectural footwear. Pioneering the intersection between fashion and design, UNITED NUDE is carried in over 40 countries, with flagship stores in New York, Amsterdam, and London. The brand has explored realms of watches, tech accessories, and collaborated with visionaries such as Iris Van Herpen and Zaha Hadid. 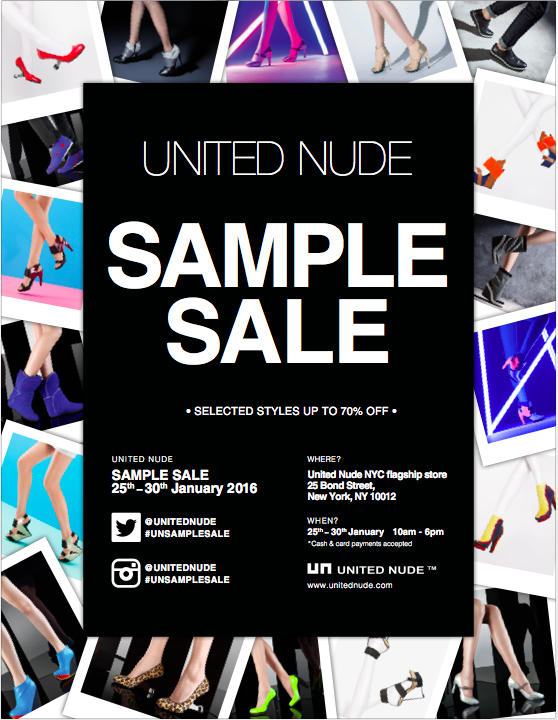