Feelgoodz, the eco-conscious footwear brand, is debuting a collection of men’s and women’s all-natural flip flops designed by word-renowned singer/songwriter and global philanthropist, Jack Johnson, who recently launched his new album, From Here to Now to You. 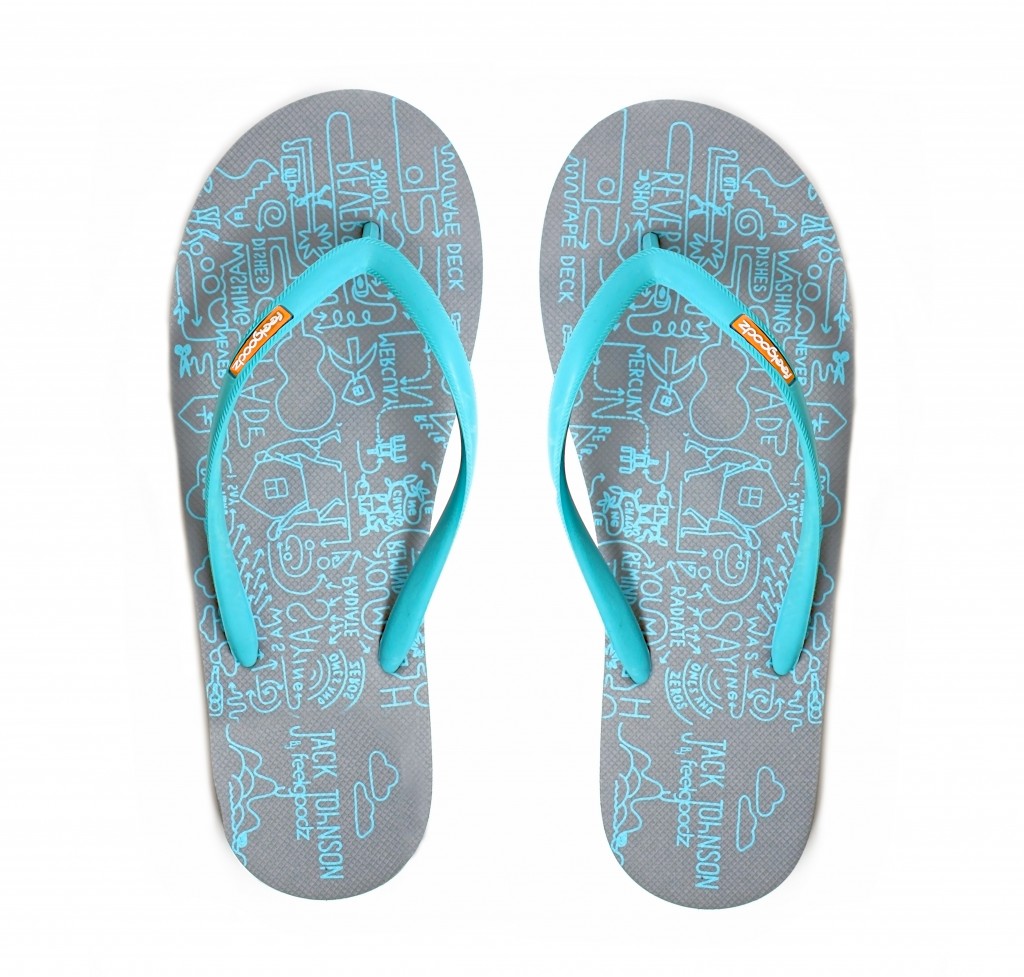 As a passionate supporter of environmental education, Jack Johnson has proven to be the ideal collaborative partner. 100% of the proceeds from the “Jack Johnson by Feelgoodz” collection will benefit the Kokua Hawaii Foundation, a non-profit organization founded by Johnson which supports environmental education in the schools and communities of his native Hawaii. Available in limited quantities, only 2,500 of each style are being produced.

Jack Johnson by Feelgoodz Collection:
Kinderz: This flip-flop, or “slipper” as they call them in Hawaii, is Jack Johnson’s favorite style and the ones he personally wears. Made of natural products including a veggie-tanned leather upper with natural Vietnamese rubber midsole and outsole. The colors selected are a throwback to the original release of this style; it is comfortable, soft, has arch support and the footbed is molded to a podiatrist’s specifications. Available for Men in Sizes: 9-10, 10-11.5, 11.5-13. (MSRP: $49.99)
The Jack Johnson by Feelgoodz Collection is available in late spring for purchase on the Feelgoodz website, Jack Johnson’s website, as well as on Jack Johnson’s North American tour.

About Feelgoodz:
Feelgoodz was founded by Kyle Berner while backpacking through Thailand. After the flip-flops he was wearing one night broke, he began his search for a new pair. He came across a pair hanging from an interesting display and found them to be the most comfortable pair of shoes he had ever worn. Made from natural rubber, the flip-flops proved to be both comfortable and sustainable. The idea of producing these particular shoes drove him to create Feelgoodz in New Orleans in 2008. In 2012, the company relocated to Raleigh, NC where Feelgoodz continues to support farmers and artisan cooperatives around the world. Please visit www.feelgoodz.com for more information.

About Jack Johnson:
Jack Johnson grew up surfing and playing guitar on the North Shore of Oahu. He released his first album Brushfire Fairytales in 2001 and since has released 6 studio albums and 2 live albums that have sold over 20 million copies worldwide. With his success, Johnson has always tried to take the spotlight and shine it on issues important to him. In 2003, Jack Johnson released On and On and, with his wife Kim, founded the Kokua Hawaii Foundation and Kokua Festival to support environmental education in Hawaii’s schools and communities. Johnson, his Brushfire Records label, and his touring crew have been leaders in the greening of the music industry in all areas of tour production and album packaging. In 2004, Johnson became the 50th member of 1% For The Planet and Johnson’s 2005 release of In Between Dreams became the first album to carry the 1% label. In 2008, Johnson released Sleep Through the Static, recorded in his solar-powered studio, and donated 100% of his tour profits to establish the Johnson Ohana Charitable Foundation, an endowment founded by Jack and Kim Johnson to support environmental, art and music education worldwide. In 2010 Johnson released To The Sea, and travelled the world donating 100% of his tour profits to charity once again. In September 2013 Johnson released his 6th studio album, From Here To Now To You, which debuted at #1 on the Billboard Charts, and embarked on an international tour of Europe and North America whose profits will support plastic free initiatives and sustainable local food through Johnson’s All At Once network. The total of these album and tour profit donations, along with Johnson’s personal charitable activities, have resulted in over $25 million donated to charity since 2001.