From elegant marble designs to fun glittery eggs, egg-decorating isn’t just for kids anymore – this year, the party experts at Evite (www.Evite.com) have uncovered a way for adults to get in on the fun too, and create gold or silver shimmer eggs for your upcoming Easter party.

Check out some more how-to ideas on: http://ideas.evite.com/slide/adult-easter/

How did we make Mustang’s big 50th celebration truly special?

Ford moved the party to the observation deck on the 86th floor of the Empire State Building.

Ford took the Mustang apart and put it back together high above the Manhattan skyline to re-create the festivities from 1965.

Check out these incredible photos from Ford:

We had so much fun checking out the Ford and was so happy to be a part of the celebrations!

Timed to the 50th anniversary of Mustang’s debut, fashion innovators including Anna Sui, Rogan, Paula Cademartori, CO|TE and Pamela Love will celebrate the iconic pony car through a limited-edition line of shirts for the Mustang Unleashed collection. Last night, at the Empire State Building where the all-new Mustang convertible was on display 86 stories above New York City – replicating the Mustang debut 50 years ago – the designers came together to announce the unique collaboration during a panel discussion, featuring their personal inspirations for the Mustang designs they will create. 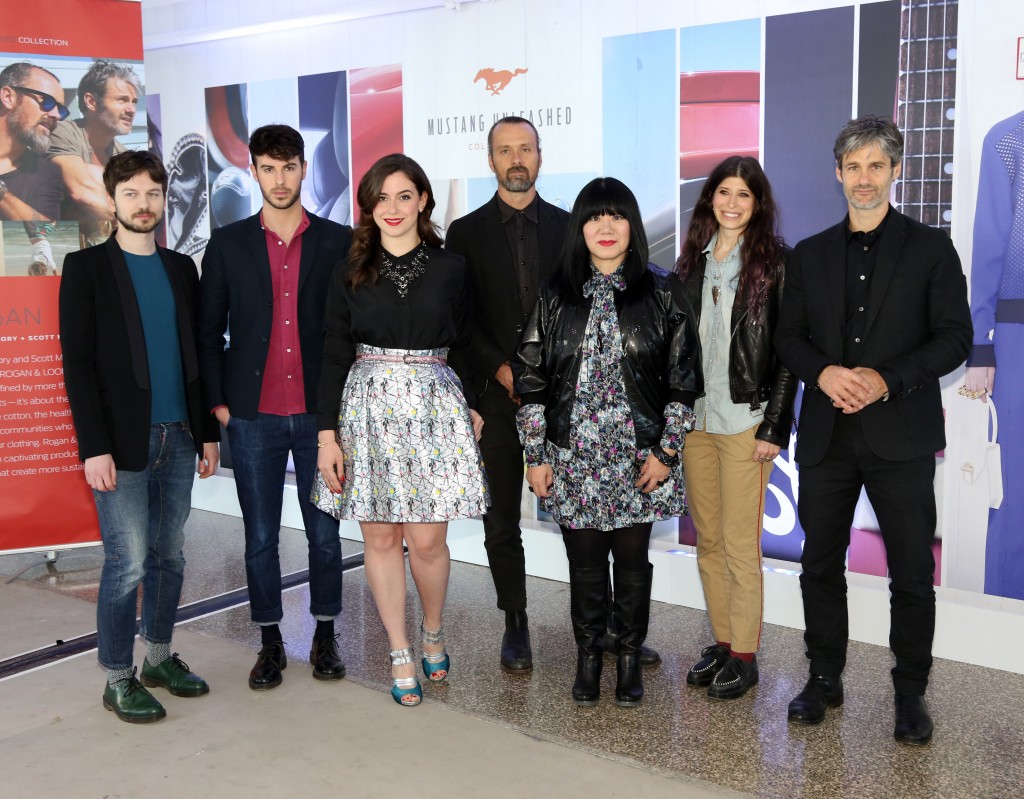 As trendsetters, the Mustang Unleashed designers embody the Mustang spirit. They are emotive, expressive and “unleashed” in their own right, living and working with a sense of freedom and individual style. These smart, sophisticated and confident designers are:

Today, these designers will meet at the Empire State Building, where the all-new Mustang convertible will be on display 86 stories above New York City, to launch the Mustang Unleashed collection and reveal their personal inspirations for the shirts they will create. Showcasing the all-new 2015 Mustang on the observation deck of the architectural landmark replicates the Mustang debut there in 1965.

“As designers, we strive to create beautiful, functional clothing evoking iconic and timeless work,” said Rogan co-founder Mackinlay-Hahn. “Mustang achieves this both in its design and role in popular culture through the years. We’re inspired by the lines and movement of the vehicle – it’s a unique meeting of sophistication and toughness.”

Ford Mustang is the newest member of a very exclusive club – vehicles in continuous production for 50 years. During the last five decades, Mustang has gained worldwide popularity and become an enduring part of pop culture, with more than 9.2 million cars sold and more than 3,300 appearances on film and TV – including Mustang’s latest big-screen appearance as the hero car in “Need for Speed.”

Mustang’s unique combination of style, performance and affordability established an entirely new class of sporty car. Now, the most advanced version yet, the 2015 model features an all-new, sophisticated design and a host of innovative new technologies and connectivity systems.

Also in honor of the anniversary, Ford and OPI have announced the line-up of colors for the OPI Ford Mustang collection that features six inspired shades. Available in U.S. stores in July, the limited edition includes: hero color Race Red, 50 Years of Style, Queen of the Road, Girls Love Ponies, Angel with a Leadfoot and The Sky’s My Limit.

Last week, my life changed because of my new phone!  My Samsung Galaxy S5 has really changed my daily life because of the amazing camera! Verizon has been great in helping me get use to my new phone and the world of Android APPS.

I went to visit my local Duane Reade in Soho for the “DuaneReade Beauty Challenge.” I got to pick up some beauty essentials by using the Isis Mobile Wallet on the Verizon Droid MAXX.

What did I get?  Some adorable items from POP Beauty, Demeter Butterscotch, L’Oreal Kohl Liner!

The camera is great for panoramic shots, selfies and works well outside and inside.   Hard to choose but I came back with a bunch of goodies!

The ISIS Wallet app is an easy way to pay – All you have to is pull it up, scan it at the cash register and it vibrates to confirm that you have paid. Isis allows consumers with compatible 4G LTE smartphones to load their credit cards, access store loyalty cards and take advantage of participating merchant offers and promotions. Isis is an easy, safe and secure way to pay – the app is PIN-protected, so you select a unique pin to enter each time you open the Wallet, and it also has a remote locking feature, so if your phone is lost, one call or click can freeze your Wallet.

The smartphone that I used to tap and pay is the Droid Ultra (exclusive to Verizon Wireless). Here’s where you can view the full list of Verizon’s Isis-ready phones: http://www.verizonwireless.com/wcms/consumer/products/isis.html

There are so many locations in Soho you can use the ISIS app like Duane Reade, Mackage Soho, American Apparel, Free People, Jamba Juice and Zara.

Just link with your Wells Fargo or AMEX card and you are good to go.

Follow @VZWNYMetro to see more adventures in the city!