Big Congrats to fellow Brooklynite and neighborhood friend ROBLE for this exciting news!

Chef Roblé Ali is taking his talents in the kitchen and applying them to perfume. The star of Chef Roblé and Co. teamed up with Brands With Purpose to launch a women’s fragrance.

The product is expected to launch Spring 2014 and Roblé says he’s currently hard at work at developing the scent—dubbed a “fragrance recipe”—that is inspired by his favorite dishes.

“As a chef, it seemed a natural fit for me to partner with a top perfumer,” he says. “So much about food and taste is actually scent. I’d say 80-percent. I find the idea of exploring the synergy between capturing the aroma of some of my favorite dishes by creating the first ‘Fragrance Recipe’ intriguing.”

Roblé has a clear idea of what he wants to create. “It has to be something so irresistible women will crave it and make it their favorite fragrance,” he says.

So what might the end result smell like? It won’t be “just another fragrance,” he says. Instead, it’ll include several of my favorite signature courses and dishes, translated in collaboration by one of the world’s top perfumers.

The fragrance is still in final development stages, but several “courses” will already be displayed during the beautypress “Spotlight Day” on September 18th in NYC.

We’re looking forward to present Chef Roblé’s “Sparkling Cocktail” and “French Toast Crunch Dessert” which both play an integrate part in the Fragrance Recipe. “Not only will we smell them but taste, as well”, says Roblé.

“It’s been quite a painstaking process to translate these unique flavors and create great-smelling fragrance equivalents, even though many ingredients in the “perfume kitchen” are quite similar to what I’m frequently using in my kitchen”, Roblé continues. Several hundred trials resulted in some unique “courses” which will serve as the signature of this Fragrance Recipe called “CLIQUE by Roblé”.

To illustrate the entire process, Brands With Purpose also partnered with the POWERSHOVEL design team. The result is a completely custom designed bottle as delectable as one of Roblé’s edible creations. Inspired by Roblé’s love of bringing people together this modern creation is the olfactive appetizer for any event. Sleek clean lines of the bottle lift to the transparent cap meticulously wrapped in just the right amount of golden bling. CLIQUE by Roblé is Simple, Timeless, Irresistible.

The initial line will consist of a 50 ml/1.7 Fl. Oz. Eau de Toilette (EDT) spray and, to round of the menu, two body care products: a revitalizing Shower Gelee and rich, indulgent Body Butter.

“So stay tuned to get a whiff!” Roblé adds.

Roblé Ali has quickly become one of the most recognizable chefs as the star of Bravo’s Chef Roblé & Co. In Roblé’s professional career, he’s worked at Abigail Kirsch, alongside Chef Chris Santos on Stanton Social and Beauty & Essex, and also served as the Executive Chef at Avenue. A truly unique talent in the culinary world, Roblé is currently working on multiple projects that include a fragrance, wine, books, apparel, music and philanthropy.

About Brands With Purpose, LLC:

Hi e-peeps! I’ve been a big fan of heydoyou.com for some time now and I’m teaming up with the gals here to write a few blog posts—exciting stuff! Before I begin, it’s probably a good idea to introduce myself, so here goes… 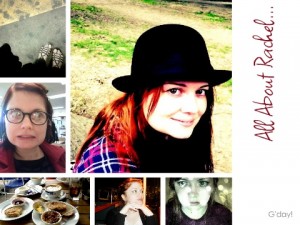 10 Things About Me: I’m Australian. I live in NYC. I can’t get enough chai tea. I still bite my nails. I studied Philosophy in college. I haven’t driven a car in over 7 years. I never make the bed. I daydream far too often. I’m too lazy to cook. I have a love-hate relationship with all things fashion.