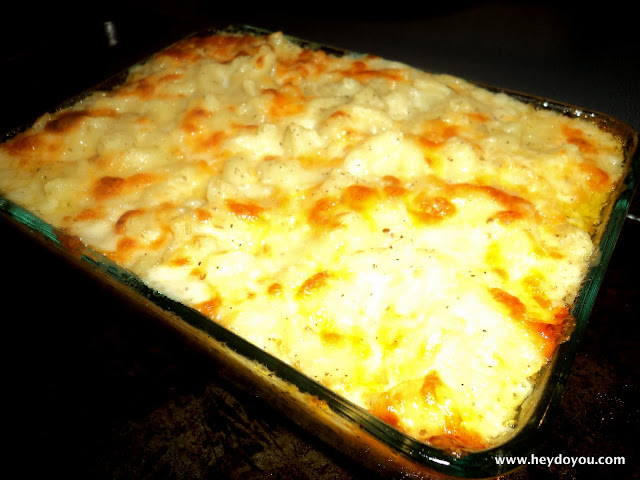 I made a cheesy and delicious macaroni bake using the Parmigiano-Reggiano that was in the swag bags of the Loblaws event I went to recently… T’was GOOOOD. 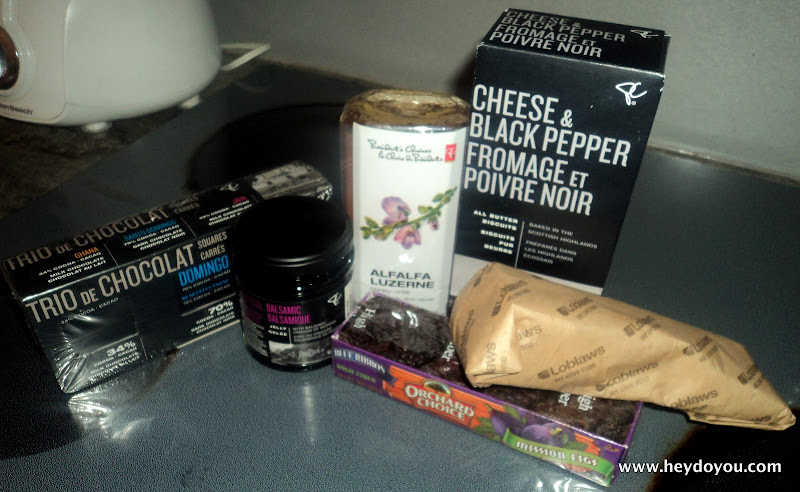 The Trio de Chocolat and the Cheese & Black Pepper butter biscuits are the BUSINESS!

Watch the cracking of a ginormous wheel of Parmigiano Reggiano!

If you didn’t get a chance to catch Mad Men’s season 5 premiere, at least get caught up on the latest spring trend — 60’s nostalgia. Makeup artist Julie Hewett created a Spring Essentials Makeup Kit and re-created three looks of our favorite Mad Men girls!

Peggy: The no-makeup makeup look never goes out of style. Just the slightest tease of blush might get you that promotion you’ve been slaving for. Betty: I love this naughty little look! Bat your pretty lashes with this soft cat-eye and you’ll get any man crawling on his knees for you. Joan: What’s living in a man’s world without a woman like this? Command the room with a strong smouldering smokey eye and blood-red lips. Get the kit here and create your own Mad Men makeup look for your next hot date! 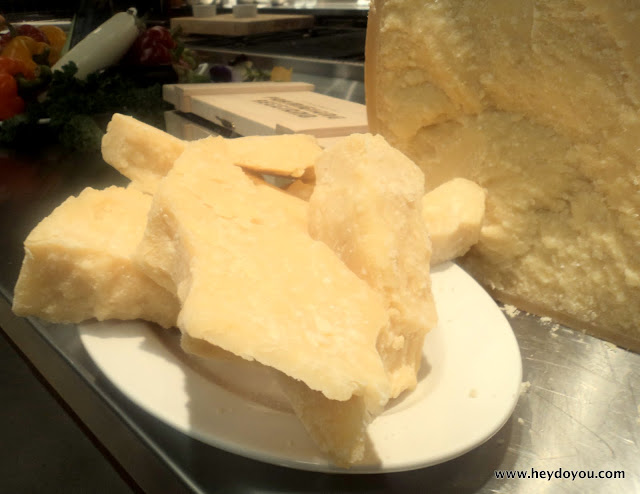 A number of us gathered in the President’s Choice cooking school of the new Loblaws Maple Leaf Gardens store, to celebrate the Loblaws world breaking attempt (cracking an 80 lb wheel of Parmigiano-Reggiano). An Italian cheese expert taught us all about the history of Parmigiano-Reggiano, and Chef Tom Filippou treated us to a delicious lunch afterwards! 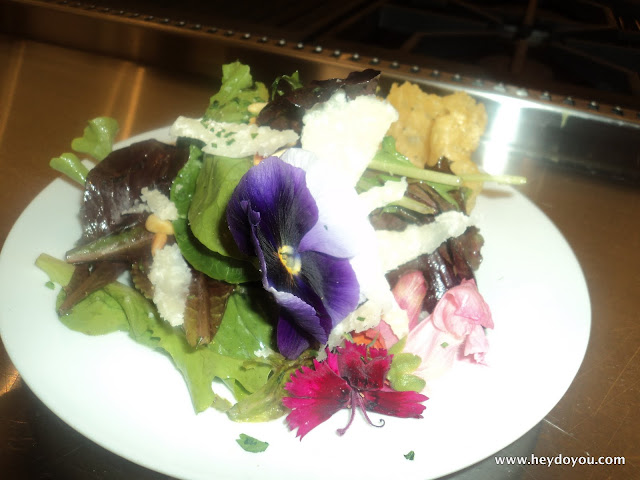 A yummy salad served in a crunchy (tasty) Parmigiano-Reggiano cup 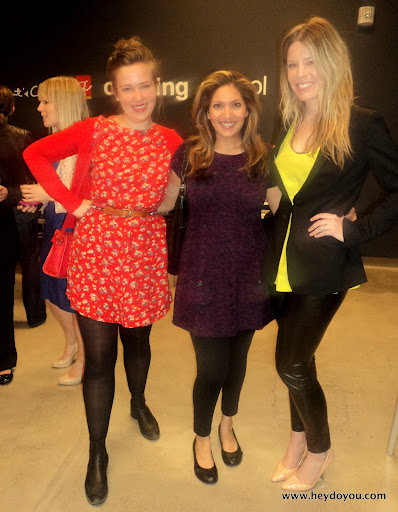 She Does The City was there! 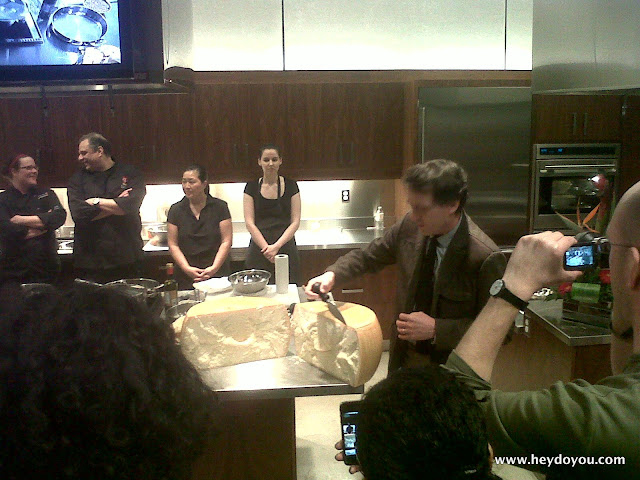 Learning all about Parmigiano-Reggiano 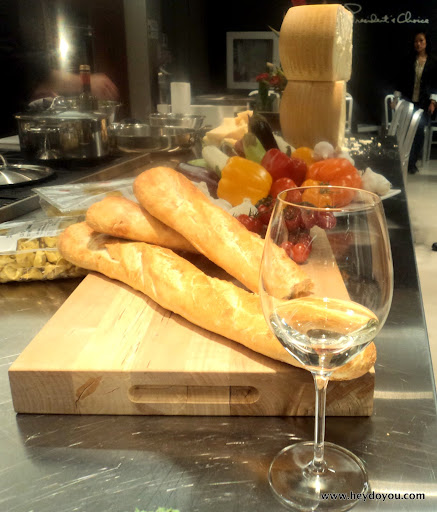 Prosecco and some good food! 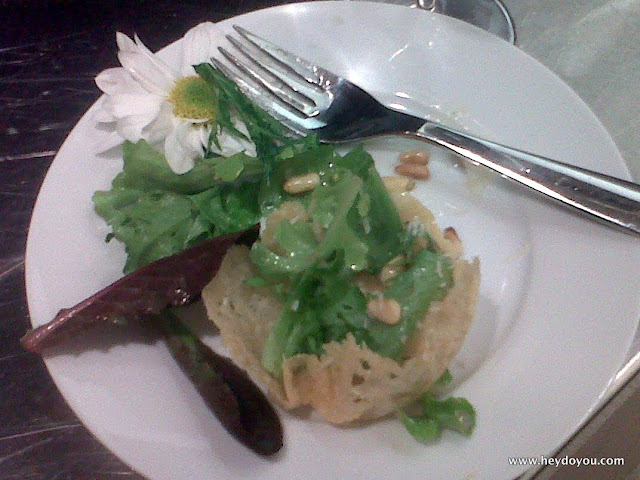 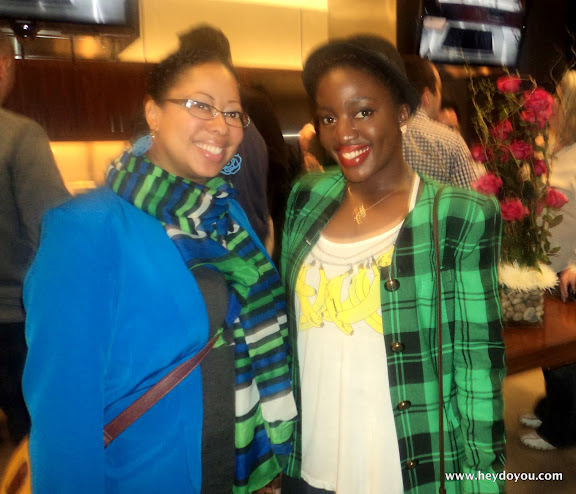 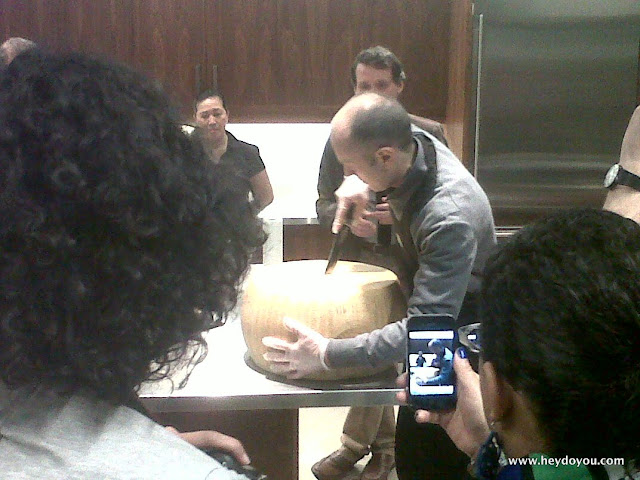 The cracking of the wheel 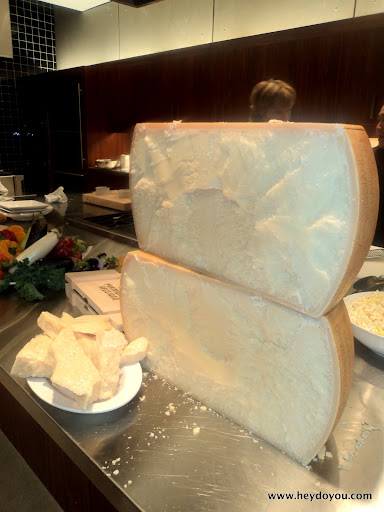 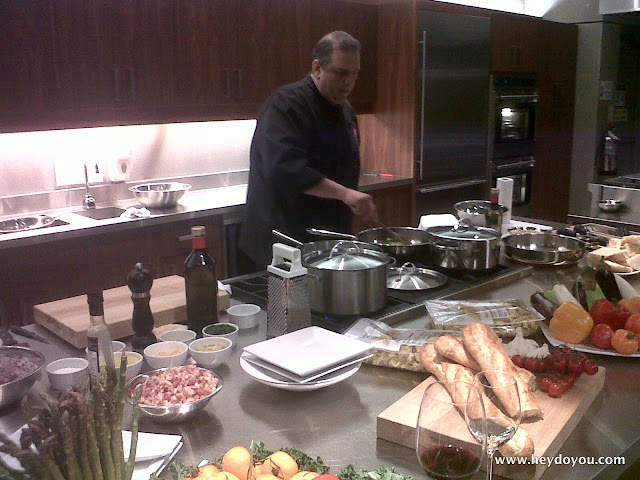 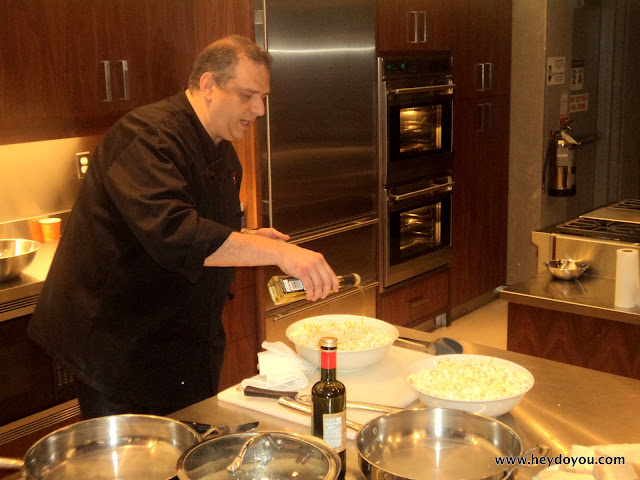 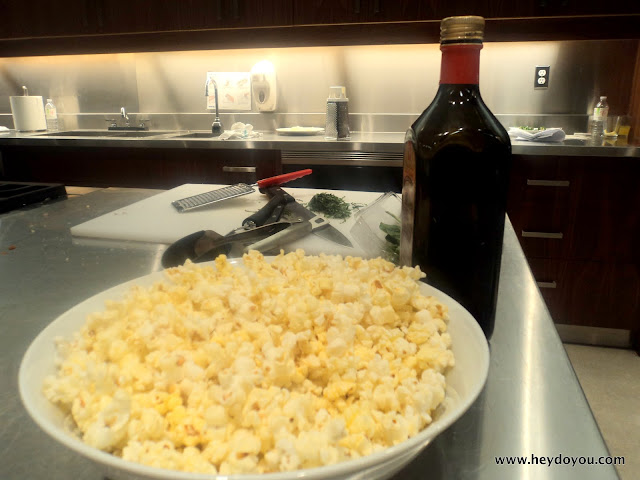 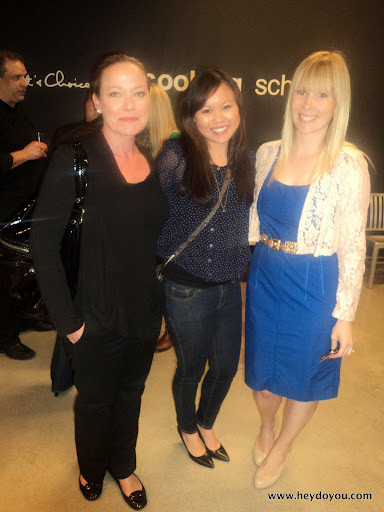 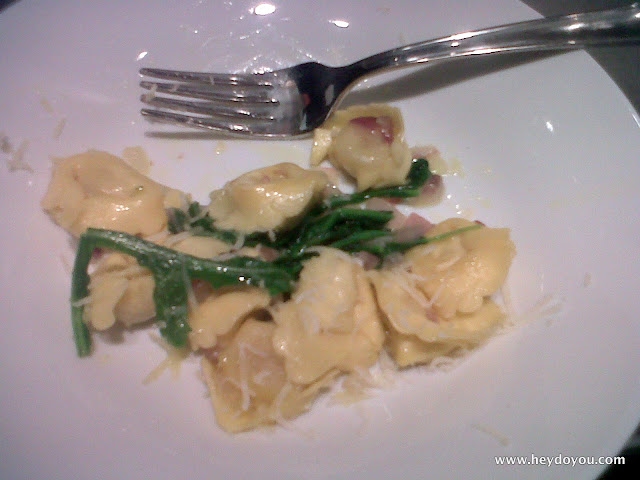 Thanks to Loblaws and RockItPromo for inviting us!

ps: This event was also to celebrate the simultaneous cracking of over 300 wheels of Parmigiano-Reggiano at noon on March 24th, in over 250 Loblaw’s stores across Canada, in a bid to break the current Guinness World Record!

0 Comments
0
Gremlin was saved from the wrath of a dog fighting ring, her legs were broken and grew back in such a way that they needed to be re-broken to be fixed. Her vocal chords were ruptured, something most likely done by shoving the end of a baseball bat down the pup’s throat. It would be easy to presume a pit bull trained under conditions filled with stress and anger would live the rest of it’s life stressed and angry. But Gremlin allows swarms of children to smother her with their love and attention during her duties as a certified therapy dog. She has touched people within her community near Cleveland, Ohio, to as far as Australia.
Though she is unable to bark or speak for herself, her owner Hughes has given her a voice and a second life. She has gone from the most heartbreaking situation to a life of healing and helping.
Take a look: http://www.hooplaha.com/heartbreak-to-healing-2/
Credit: HooplaHa- Life With A Smile- www.hooplaha.com

Gremlin was a severely abused dog, used as a bait dog in a dogfighting ring. Her back legs were broken, she can no longer bark, and she is partially deaf. But an undercover police officer adopted her, and today Gremlin’s life is very different.

As a therapy dog, Gremlin visits schools for student reading programs, and she visits patients in nursing facilities.

Her Facebook page stated, “Gremlin’s mission is to bring awareness to dogfighting and how the cruelty of humans never cease to amaze us.”

Gremlin’s Facebook page also announced the dog is not allowed in Parma City Schools. “I am very said to announce that the City of Parma has stepped in and told the school I am no longer allowed to visit because the City does not allow my breed. It is very sad that all those children will miss out on a wonderful program because of how I look,” the Facebook post said.

More than 350 comments from fans called the ban “discrimination” and “ignorant.”

“We were just doing exploratory calling for a possible therapy program,” said Kevin Brennan, the district’s communications specialist. “We’ve made no commitment to any program” or any company associated with certified therapy dogs, Brennan said.

The program would be for a special needs pre-school, if the district decides to adopt it. Brennan said during the research into the possible program, school leaders were advised by counsel that pit bulls are not allowed on school property because of a city ordinance.

Gremlin’s Facebook page responded to the pit bull’s supporters by updating other upcoming school visits, including trips planned in the coming weeks to North Ridgeville and Sandusky schools. My new beauty obsession: @HelixThreadEase is an at-home threading tool that really simplifies the process of threading. The tool as you can see below, consists of a two sides that mimic two hands that would actually hold the thread to remove hair. If you check out their video, you’ll understand better than I can put into words 🙂 This is by far one of the best beauty tools I’ve come upon in a LONG time thanks to my new friend I met at The MakeUp Show, Barbie Bonds of iKandybyBarbie 🙂 Thanks girl! If you’ve gotten facial hair threaded before, it’ll be a breeze for you since you already know what to expect and you’ve seen it done. The Helix Hair Threading system cuts out the pain of having the thread dig into your skin while pulling both sides of the thread. What I love most about this threading system is that it’s not something I need to consistently repurchase. All you need to do after you run out of thread is go to a fabric store or specialty store and repurchase cotton thread and you’re ready to go. This is going to save me oodles of money getting my brows and upper lip done! Ladies, can you imagine how much money you spend on a monthly or even yearly basis on getting hair removed? I haven’t tried it on my legs yet but I’m sure (if you had the time) you could save money by using the Helix Hair Threading system on ’em too. Bottom line… I LOVE this! I don’t believe I’ve ever really raved about a product before but I am truly recommending this! If you’re like me and you don’t have time to get waxed or threaded on a regular basis, this will become your best friend. You can purchase it directly on their website.

If you do end up purchasing this, please make sure you follow their instructions to watch their videos before you try it out. I will NOT be held liable for your uneven/patchy brows 🙂 AND if you do try it out, let me know how it works for you!