After the tearfully sensitive speech Chuck (Ed Westwick) gave to Blair (Leighton Meester) last week, she’s obviously wondering if he’s really changed for the better. “I simply cannot have Chuck ‘chucking’ my mind.” She stalks him, draws venn diagrams on the ‘new’ and ‘old’ Chuck, even follows him to the delightful event featuring Punchdrunk’s provocative theater experience, “Sleep No More,” mask and all.

There’s a really sexy scene when they’re trapped by the bar, alone, and you can just smell the sexual tension between them. I was dying when Chuck just went in for the kill and kissed her and released all that passion. With another slap on the face, Blair runs off. “You are incapable of change. And now, thanks to you, I’m more certain than ever that I chose the right man.” But perhaps Chuck might have done that just to help her stay on the right track, making him a changed man after all. 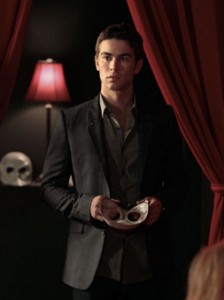 And what about Nate (Chace Crawford) and his new girlfriend/boss Diana (Elizabeth Hurley)? “It’s just sex and work, it doesn’t change.” Of course he’s thinking he might have a better relationship with a girl like Charlie (Kaylee DeFer), especially after that steamy kiss the other night. Charlie just wants to save her own skin, but jealous can drive some girls to do some crazy things. When the cougar and the cub have their eyes on the prey, you don’t want to get involved.

Charlie is getting really good at playing this Upper East Side back-stabber, but let’s get real. She’s no Blair Waldorf and when the truth comes out, she’s going to burst in tears. I don’t feel sorry for her, do you? Her ex Max (Brian J. Smith) comes to New York for a job interview and bumps into Serena (Blake Lively) and they hit it off. Charlie gets mixed up in Diana’s drama with Nate and we all know who’s going to win in this fight.

Charlie kisses Max thinking he’s Nate and Max kisses Charlie thinking she’s Serena. I’ll never get sick of these classic GG scenarios. After all this, not only does Charlie lose two great men that would have given her everything, she also lost a job. “Let me put you out of your misery. You’re fired.” But one thing’s for sure — Serena’s still (miraculously) in the dark. Of course, since she’s literally the only reason Charlie can still exist on this show.

Very.com Bringing UK Style and Flare to the US