Like many TV shows, there’s got to be some fillers. This is what happens tonight on a crash landing in Haiti on the way to Caracas. There’s a hurricane, and an old guy gets a heart-attack and the Pan Am girls are set to make things right. “Here comes Ginny. I wonder which one’s gonna be more destructive.” Funny how the real tornado is with the frequent flyer Miguel (Aaron Diaz) and his sense of entitlement.

As per usual, we’re following some more historical facts, this time following the killings in Haiti. The team takes back a 17-year-old girl in replacement for the dead passenger they were unable to rescue. I’m not sure if this story says a lot — apparently having the idea that the old man wanted to help and his death saved another’s life (not something I’d like written down on my tombstone, but okay). I knew Maggie (Christina Ricci) was going to heat things up tonight, but I definitely didn’t expect her to blow up in Miguel’s face and throw his luggage off the plane. “Thank you for flying Pan Am.” 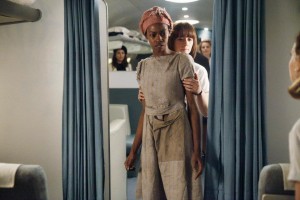 Collette (Karine Vanasse) and Ted (Michael Molsey) set out to find a doctor and we see how difficult it is to work together at this time. It’s really thrilling to watch all of this happen on a TV series, and  so carefully and charmingly. However, no real drama and sexiness happens. The only exciting thing about tonight is the kiss between Dean (Mike Vogels) and Collette at the end of the show. I’m super psyched to find out what happens next week.

Enjoy a great experience for all tastes!

These fantastic Canadian artists have joined together to form this hip hop super group – Ain’t No Love. Ain’t No Love is comprised of Beans, 1990, Liam Clarke and Saidah Conrad. Personally I’ve always been a fan of this group even when it was formally – Wra  Beans and I always thought they had a different sound, but with the addition of Liam Clarke, they are on FIRE!!! LITERALLY. I’m in love with their debut album and first video together. What do you think??

Love getting these new beats and sounds..

If you know of any up and coming artists, let me know!