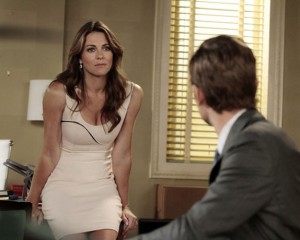 Nate (Chase Crawford) gets a taste of working in the adult world as he applies for an internship at a new publishing firm with his sexy boss Hurley that sets him up for a scandal between some of his mom’s politician friends. We could have seen this a mile away, I mean what kind of woman can just fire a whole crew of reporters and throw Nate in a live interview? I’m still waiting for Nate to grow up, but it looks like that won’t be happening for a while.

Of course, Blair (Leighton Meester) is in denial and does anything in her power to avoid finding out about her baby daddy. Too bad Dan Humphrey (Penn Badgley) won’t let her live it down. With the help of Blair’s housekeeper Dorota, it turns out the father is Louis. Although I was almost sure it’d be Chuck to spice up the drama this season, I”m happy for her. Can her fairy tale actually be coming true? Weirdly enough, Blair goes to Chuck (Ed Westwick) and tells him she’s pregnant with Louis’ child. He mentions she must be relieved it isn’t his or it’d really ruin her princess party. But instead Blair says, “There is a part of me that really wanted it to be yours.” Could she have second thoughts about her prince charming?

Meanwhile Dan is still trying to kill his book and visits his mentor Noah to see if he could influence Simon & Schuster to pull the novel. Noah suggests Dan let the book get published and worry about who reads it later. Maybe it won’t even get read by anyone that matters. Instead, Noah launches the book under his own name. Once Dan finds this out, he appears at the launch party. “You didn’t write this book. I did.” What happens next is really unexpected. Noah and his mates give a round of applause for the author that’s has finally accepted his fate. “Destiny is a scary thing to face. We all deserve a push.”

Lastly, it looks like Charlie/Ivy (Kaylee DeFer) is here to stay. She has to stick to one identity and she’s choosing to be a part of the Upper East Side royalty. When Carol comes to town trying to get Charlie out of here, Charlie decides she wants to stay and if Carol has a problem with it she’ll bring them both down. After all, what’s she got left to lose? Looks like she’s getting the hang of things pretty quickly.