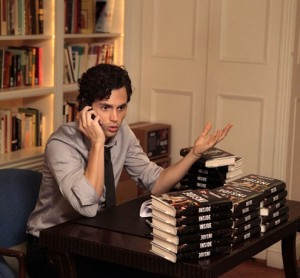 Looks like someone isn’t so invisible after all. Dan Humphrey (Penn Badgley) tells his friends about the book and pretty much everyone except Blair is happy about it. Skip back a few episodes to when prince Louis killed the story that was planned to be published in Vanity Fair, Blair (Leighton Meester) had the idea that she was the wicked witch in this tale. But it looks like things might be coming true at the end when Blair and Dan kiss again. Is Dan seriously getting in this late in the game? It’s a little too hard to believe.

Prince Louis and Blair had planned to tell their families and friends about the baby, but it all gets pushed aside due to Dan’s book launch. Louis reads that they hook up in the book and completely loses trust in her fiance. It’s so funny how Blair can be so in love with this guy and yet still be so shady about everything. But that’s why we love Blair so much! “She will always have her secrets. She can’t exist without them.”

Serena Van Der Woodsen (Blake Lively) still thinks Dan only thinks the world of her until she realizes she’s been portrayed as a shallow party girl. She confronts Dan, saying her career is on the line with all these facts about her dangerous past. Blair’s kiss must be electrifying because all Dan can think about is fixing things with her and totally punks Serena off. “If you can’t tell the difference between what I did to Blair and what i did to you then maybe your portrayal in the book is more accurate than I thought.”

Serena’s boss wants the rights to the book, Chuck finally begins repenting his loss for Blair, Charlie joins Nate on the scandal magazine and Dan scratches off his friends and family from all his future book events. Lonely boy is officially ‘Only boy.’ The only happy ending still standing (barely) is Blair and her prince charming.