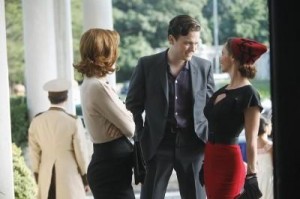 Kate Cameron (Kelli Garner) is on another mission, but it looks like Maggie Ryan (Christina Ricci) already has her claws sinked in the eye of the prize. “He’s already interested in another stewardess,” she says. “Well, un-interest him.” Do I smell a cat-fight?

Goran Visnjic plays Yugoslavian U.N. diplomat Niko Lonza that has all the girls acting crazy. Kate steps in on Maggie’s prey with a game of billiards. I’m not sure what the stewardess code-of-conduct is for flirting, but Maggie’s a good sport and let’s Kate take the prize. “Nico’s worth it.” Things go a little further than I expected. Kate successfully completes her assignment (it’s getting a little too easy for me, if you ask my opinion). But here’s a surprise — are seeing each other in New York?

On another note, Captain Dean Lowrey (Mike Vogel) cashes in on a fling with the airline executive’s secretary over a box of JuJuBe candies (OMG, remember those?), courtesy of his wingman co-pilot Ted Vanderway (Michael Molsey). What’s worse, having an affair with your employer’s wife or his mistress? Hard to say. “A wife is the block he grew up in, a mistress is where he’s living now.”

Ted is still incredibly pathetic when it comes to his infatuation with Laura Cameron (Margot Robbie). He follows her to Harlem as she tries to make things right with her ex by returning the ring he spent all his savings on. The obnoxious male side of him screws up her deal with the man who bought her ring and she returns empty-handed and yet again totally upset with him. He does make a come-back though. But really, who trades his Rolex in for another man’s engagement ring? “A guy’s got to pick a good time to give a girl a ring.” A little much, buddy? No wonder he’s not getting anywhere with the Pan Am girls!

What is the key to beautiful, gorgeous and healthy hair?

There are so many girls who are ‘just hair’. You know, the ones who are so stunning because of their perfect coif? They are always known for their hair? Or do you challenge yourself by doing different things with your hair until you can rock every single style. Chameleons are the absolute opposite of that.

What do you think you are? A ‘Just Hair’ or a ‘Chameleon”?

Miss Nebby from the Segment