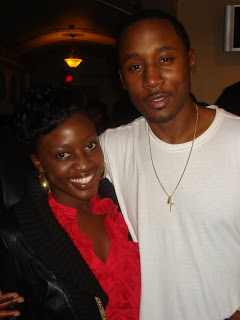 I would like to say Congratulations to Darren and the cast of Secrets of a Black Boy. You ALL did such an amazing job! No one could’ve have brought that play to life the way you guys did on that stage! You captured our hearts and our minds; it was truly inspiring to see you all on stage. 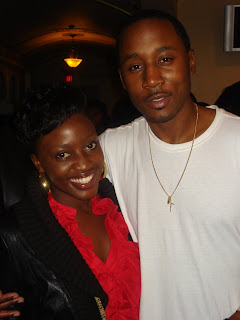 Me and the talented Darren Anthony

I don’t know anything about writing a play, never mind bringing it to life the way the cast of did; But I know that there are A LOT of plays in the world of theatre… just as there are many stars in the sky… but there are those few special stars, that shine extra bright…

We told you about Secrets of a Black Boy, back in July; and anxiously awaited its debut on September 23rd!
The play ran until October 3rd, but I chose to go on the last day for a reason… Everyone had been talking about how amazing the play was, but I wanted to see if I would have a similar experience after almost 2 weeks of them being on stage. I wanted to see if they’d be as passionate as they had been on their first day…
Long story short; I was blown away by this play! I went in expecting to see one of “those” plays. You know the ones that make fun of the “silly” stuff that “black” people do, clichés, the usual stuff. I was sooo WRONG!! Instead, there was truth, passion, pain and even humour. They managed to suck the audience into their world, kept them there till the very end, and left them wanting more.

Trey Anthony (Darren’s sister) warmed up the audience with jokes, and had people clapping and roaring with laughter. It was so moving to see how proud she was of her brother; I loved the sincerity in her voice as she expressed her gratitude to everyone for coming out and supporting her brother.
The opening scene was so powerful, in fact during the whole play; I’m convinced you could cut the intensity in the room with a knife! “The Posture” scene began with a free black man who proudly holds his head high, then slavery comes along and he no longer has his freedom and his pride is stripped away; he no longer walks with his head high. But then he’s freed again, but that’s short lived as once again slavery is back; only this time it’s by his own people. It ends with him rising above all the trials and tribulations, and being sworn in as President.
We then meet Sheldon, Jerome, Biscuit (the youngest), Jakes and Sean; five friends who have come together inside a community center that’s played a vital role in their lives, and is now about to be torn down, “to make room for the new condos.” During the course of a heated dominoes game; we learn each character’s secret. Secrets that they won’t let anyone know for fear of being judged, or secrets they simply don’t know how to share…  I can’t help but notice the words Mandingo, Dealer, Angry, and Lazy are painted across the back wall of the stage…
The final scene ends with all five men standing strong, and boldly saying, “WE ARE HERE!” over and over until the light dims. The power in their voices was very , and the audience’s emotion was felt through the standing ovation that seemed to go on forever. Everyone was so proud of the cast; they successfully brought the play to life and delivered the secret. WE ARE HERE!
Black men are often portrayed as angry, aggressive, ignorant, and “no good”, for whatever reason and I’m hoping after this play, we can take a deeper look into our black men and appreciate them, and be sensitive to the struggle that they’ve been through or may still be experiencing…
Fantastic play! I saved the best for last, and got so MUCH MORE!
*kisses*
Bella
Visit Darren’s blog here!
0 Comments
0 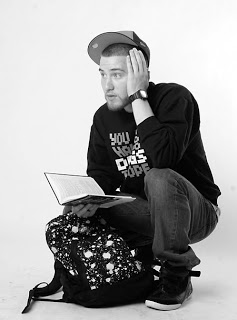 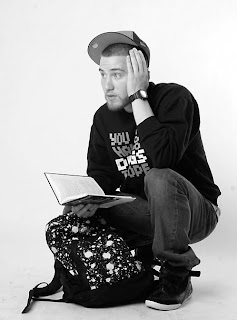 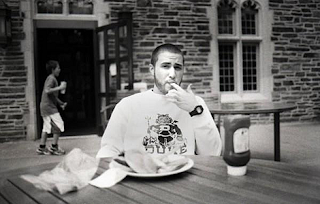 “Most college boys spend their free time playing beer pong and hooking up with hot chicks. But Southfield, Michigan-bred producer/singer/songwriter Mike Posner, 21, doesn’t let the hedonistic side of life at Duke University derail him from his musical dreams.” 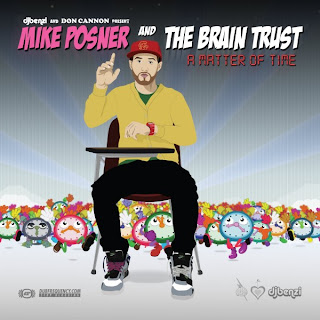 Have I been living under a rock?! How did I not know about this man? lol. The man I’m talking about is Mike Posner. If you know who I’m talking about I’m POSITIVE you think he’s dope. And for those of you who don’t, well you’re about to understand why. In fact, open his myspace, in a new tab, press play and then finish reading, our time’s not done. lol 🙂
So here’s how it happened. I was sitting in my room trying to relax, and I was in desperate need of hearing something new. I love discovering new music, the way art is expressed in different ways by all kinds of different people around the world just amazes me… I like finding “hidden jewels”, well in his case not so hidden.

Anyway so I’m looking through my iTunes library and nothing’s appealing to me… So I go on a lil music hunt, and happily stumble upon Mike Posner. I am so impressed…
So who is Mike Poser? I can’t give you an accurate description as I’ve never met the guy. Yet. 🙂
He’s a 21 year old producer/singer/songwriter, currently in his senior year at Duke University, majoring in both sociology and business. AND his web series just premiered. Damn… Talented, Driven, and Educated. He’s like… perfect. lol
You know how people start learning about networking as they get older (late teens, early 20s, some never lol), well he started making beats at only 13, and began networking with other musicians through Internet message boards. What were you doing at 13??
He’s collaborated with artists like Kid Cudi, Wale, Big Sean, Jackie Chain, Donnis, One Be Lo, Eric Holljes, BMR, and 3OH3. He’s also worked with Don Cannon and DJ Benzi on A Matter Of Time.
He wrote, produced, and recorded EVERY track on his debut mixtape; A Matter of Time in under 3 months! (he started in January, and it hit the web in March) His mixtape sparked a months-long bidding war among record labels, in which major recording label J Records were the proud victors.
A Matter of Time is OUT OF THIS WORLD. It’s like Hip Hop, R&B and Pop came together and made babies… tracks whatever, it’s crazy. I definitely recommend that you download it right now, if you haven’t already *wink wink*
Check out Episode 1: Back To School…And Off To Atlanta of Mike Posners webs series “One Foot Out The Door”. This is the premier episode where Mike heads back to Duke University for his senior year, while taking on Music as his full time career. Enjoy!
“One Foot Out The Door” Episode 1: Back To School…And Off To Atlanta from Mike Posner on Vimeo.
source: elitaste
I can’t wait for his album and next mixtape!!!
*kisses!*
Bella
0 Comments
0