Today is the the hottest day in LA since I arrived in June! Woowee!

Sent via BlackBerry from T-Mobile
62 Comments
0 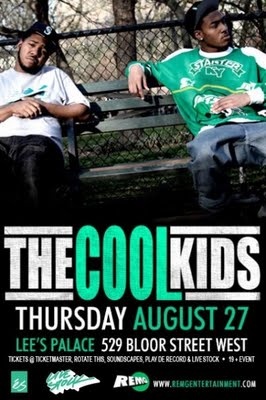 REMG Entertainment presents The Cool Kids live in concert tonight at Lee’s Palace, and it’s only fitting that T.O’s very own Blake Carrington is opening up for them! 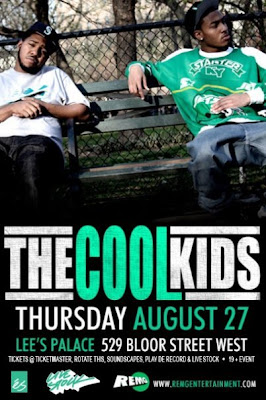 The Cool Kids: Chuck Inglish & Mikey Rocks met on Myspace back in 2005 while Chuck was attending the Illinois Art Institute in Chicago, and Mikey was still in High school. Barely a year into their formation, the duo began performing at events/parties/venues all over the city. They caught the attention of DJs Flosstradamus, who had a monthly dance night at the Town Hall Pub in Chicago; they invited The Cool Kids to perform, and the rest as they say is history. You may know them from the track “Getting It”, a track with Lil Wayne, where the two do more than hold their own, despite being on a track with one of the most innovative and successful MCs in the world. Their songs have been featured in the HBO series Entourage, as well as NBA Live 08.

The Cool Kids recently released their second official mixtape, Gone Fishing, and it’s available for free download on their website. The mixtape features guest appearances by Ludacris, Bun B and GLC, and is said to just be an “appetizer” before their album “When Fish Ride Bicycles.” drops.
Download Gone Fishing here! 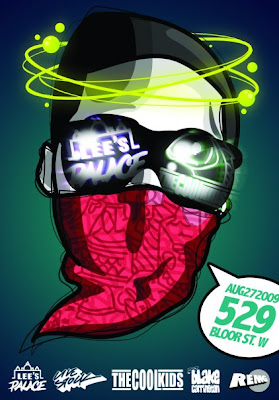 What can I say about Mr. Carrington!? He rocks a 90s inspired hair cut, has a unique fashion sense, and one of the most infectious personalities ever! Every time I’ve seen him he’s having a great time, whether he’s rapping or hosting parties, the crowd ALWAYS goes WILD! They say he came out of his momma’s womb rapping! Born in Toronto, but raised in Buffalo, NY; Blake started writing rhymes as a way to get through life’s tough times. After graduating from Seneca with a diploma in Independent Music Production, he decided to pursue his passion and started working on his first album Dolla NA Dream. His most recent mixtape Welcome To My World,was executive produced by Ron D, mixed by JESTER, and is available for download here!
For more info on the event, click here
We’ll be there tonight showing our love and support, and so should you!!
xoxo
Bella