RSVP & SAVE THE DATE 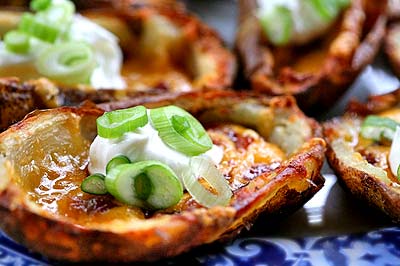 I woke up with a craving and found this recipe here 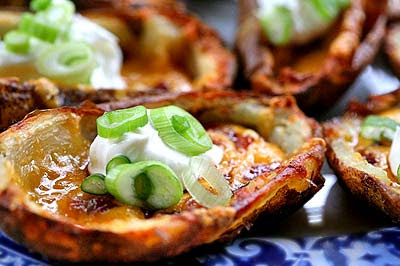 Potato Skins Recipe
INGREDIENTS
6 small to medium sized russet baking potatoes (total 3 pounds)
Olive oil
Canola oil or grapeseed oil
Kosher salt
Freshly ground pepper
6 strips of bacon
4 ounces grated cheddar cheese
1/2 cup sour cream
2 green onions, thinly sliced, including the greens of the onions
METHOD
1 Scrub the potatoes clean then bake the potatoes using your favorite method, either oven or microwave. If using an oven, rub with olive oil and bake in a 400°F oven for about an hour until the potatoes are cooked through and give a little when pressed. If using a microwave, rub all over with olive oil and cook on the high setting for about 5 minutes per potato. I have found that baking the potatoes in a conventional oven yields potatoes that are easier to work with (cut and scoop out), the potato seems to adhere to the skins a little better, but there is hardly a discernible difference in the final product.
2 While the potatoes are cooking, cook the bacon strips in a frying pan on medium low heat for 10 to 15 minutes, or until crisp. Drain on paper towels. Let cool. Crumble.

3 Remove the potatoes from the oven and let cool enough to handle. Cut in half horizontally. Use a spoon to carefully scoop out the insides, reserving the scooped potatoes for another use, leaving about 1/4 of an inch of potato on the skin.
Increase the heat of the oven to 450°F. Brush or rub grapeseed oil or canola oil (or another high smoke point oil) all over the potato skins, outside and in. Sprinkle with salt. Place on a baking rack in a roasting pan (don’t use a cookie sheet, it will warp, use a roasting pan or broiler pan that can take the heat). Cook for 10 minutes on one side, then flip the skins over and cook for another 10 minutes. Remove from oven and let cool enough to handle.

4 Arrange the potato skins skin-side down on the roasting pan or rack. Sprinkle the insides with freshly ground black pepper, cheddar cheese, and crumbled bacon. Return to the oven. Broil for an additional 2 minutes, or until the cheese is bubbly. Remove from oven. Use tongs to place skins on a serving plate. Add a dollop of sour cream to each skin, sprinkle with green onions.
Serve immediately. Serves 4 to 6.