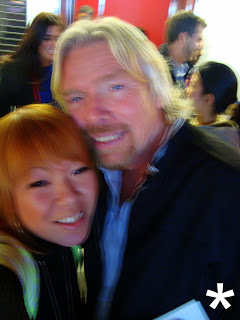 Went down to the Toronto Filmport today to hear Sir Richard Branson’s ‘live’ interview with Toronto Star.  If you don’t know Sir Richard Branson… I’m sure you have heard of one of his 360 companies: Virgin Music, Radio, Airlines, Cellphones, Cola. etc.
He had a lot of great stuff to say about the recession as an opportunity for people to become entrepreneurial. Virgin Mobile was one of the first accounts I worked on with Matchstick back in 2005. So I personally know and love the Virgin brand.  My favorite thing he said was: “I love every minute of my life”.
I will post the snipets shortly.. but for now!

Congrats to Due North the Toronto communications agency team that won the student competition. Up to 150 students were mentred by firms to develop Virgin Mobile’s RE*Generation creative campaign.  Judged by Virgin Unite and Sir Richard Branson.  The competitors included DDB, Cossette, Bos, Quiller and Blake, Grey Canada, Ogilvy & Mather, Starcom, Leo Burnett, TBWA, Publicis, Agency 59, Lowe Roche, Bensimon Bryne, BBDO, Cundari Group and Due North. I had a feeling that they were going to win! So I snapped a photo of the team just moments before the announcement:

The winning slogan was: Your ticket in is their ticket out. The campaign will launch nationally in 2009 with Astral media.
So in a few hours, I will be off to the Steam Whistle Brewery for a Puma fashion show and a concert by Kardinal Offishall!
Pics and video to come soon!  Details here.

Here’s me and Kardi at Cartel for his album launch in Sept. Here is the post.
HeyDoYou is for the cute, clever and connected – Follow this blog!
0 Comments
0