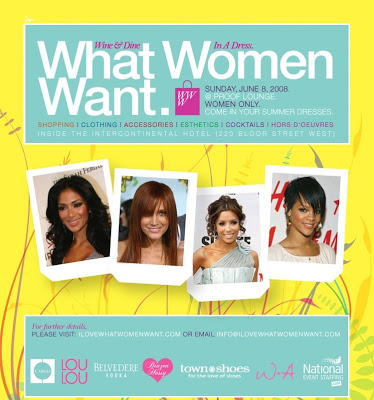 Mix, Mingle, Shop – Wine & Dine in a Dress!
Event Founder, Shannae Ingleton knows What Women Want! An afternoon of pampering and class bring women together to celebrate the distinct talents of Toronto’s fashion and beauty industries. What Women Want is set to launch its fourth party at the Intercontinental Hotel’s PROOF Bar and Sky Lounge from 1 p.m. to 6 p.m. on June 8, 2008.The event attracts style conscious females who want to stay up to date on what to wear, how to get it and where to buy it. This season’s event will feature over ten beauty and fashion designers. Whether you are looking for eco-friendly styles by Juma Online, JLo’s curves from Beauty & Behind or the creative crafts of Josie Tecson Jewelry, What Women Want has something for everyone!!!Women can socialize in style while enjoying massage treatments, microdermabrasion, tarot card readings, shopping and other celebrated activities. Complimentary cocktails, hors d’oeurves and giftbags will be available for ladies to enjoy! Marc Ecko Timepieces threw the ultimate ENCORE do you want more? Party at the State Theater. Dancing, fashion and cheering on your favourite spinmaster – it starts with the DJ

Looking for the pix from Pink Carpet Soiree?

Here is a sneak peek!

Have pix from the event you want to share? Send them to pinkcarpetsoiree@gmail.com

Randy Couture opens up and talks about a brand new clothing line for 18-35 yr old MMA and UFC fans. This line is to have warrior theme muscle t’s, denim, embellished suits and much more.

Couture says in order to be involved in Mix Martial Arts, you have to be prepared for all the dedication, time and sacrafices. You need a good workout partner and trainer and of course the fashion to go along with the glory!

Sean Sherk, looking good and fighting well goes hand in hand!
Apparently all Affliction and MMA type shirts are banned in all clubs in Vancouver and must be worn inside out because of it gang relatedness??? Anyone else heard about this?

So I just got back from the Toronto Premiere of You Don’t Mess With The Zohan (I am the lead promo hair stylist for the movie here in Toronto) and Mariah Carey makes more than a cameo in the movie!

Let me start off by saying the movie is hilarious and everyone must go to see it! I cannot remember the last time I heard an entire audience laugh so hard and at so many times throughout the movie!

The lead Zohan, played by Adam Sandler, is a terrorist who wants to become a hair dresser in NYC. He wears in virtually every other scene of the movie a Mariah Carey T-shirt, the promo shot from Rainbow but also the promo T-shirt from The Adventures of Mimi Tour where she is wearing the purple baby doll dress.

In about three-fourths into the movie, Mariah makes her first appearance. Everyone is at the Hacky Sack game in a large stadium and after the initial announcements on players and special guests, they announce Mariah Carey is there to sing the national anthem. She does, and sings a couple of lines, incredibly of course! She is wearing a hot pink mini dress with a ridiculous amount of cleavage (which they mock later – Mariah fully acknowledging and making fun of with). She looks magnificent, not as slender as she is right now but all in all healthy, glowing and happy! Cut to a few minutes later and I am surprised to see Mariah appear again!

This time in her dressing room being prepped by her hair stylist (real life stylist Lew Ablahani) while a fight breaks out. It cuts back to her many times until almost the final credits and every time they cut back to her she is seemingly so more and more like a diva! She pokes fun at herself as well as others in the movie. All in all, Mariah played an excellent job in doing herself or at least as most people perceive her to be.

New in K.Mark (Kensington Market) is Free Your Game.

This unique space is a retail store that aims to reinvent style in golf through mixing amazing streetwear clothing with new and edgy golf brands.

Must mention the incredible golf balls by the Golf Refugees, wedges by Feel Golf, gloves by Hattie Smart, and Brixton hats to round out the mix.

Shoes you ask? Puma and Nycole St. Louis.
LongOverdew was invited to the official invitation to the Free Your Game Launch Party and Golf Fashion Show on Saturday May 24th 2008.
Check out the fashion crowd! We got her at Powerball to! in Purple!